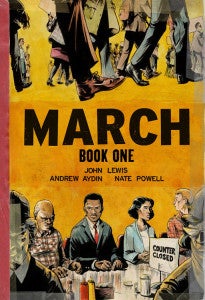 This summer, Congressman John Lewis, a major player in the Civil Rights Movement of the 1960s, became the first sitting member of the U.S. Congress ever to pen a graphic novel. The book--Top Shelf's March--has attracted some attention, selling out at the physical level and featuring a cover blurb by former President Bill Clinton, and last night it broke into the media mainstream in a big way--with Lewis making an appearance on The Colbert Report. It's the first of three planned volumes that Congressman Lewis is working on with Andrew Aydin and Nate Powell, and tells the story of Lewis's life, focusing on his time marching with Dr. Martin Luther King, Jr. Asked why comics--and whether he thought making a comic book about it somehow diminished the seriousness of the events described within, Lewis said that there was a comic book that he remembers loving, and that left a lasting impact on him. "There was another comic book that came out in 1957 when I was 17 years old--it was the Martin Luther King story of the Montgomery movement. It was called Martin Luther King, Jr. and the Montgomery Story," said Lewis. "I read it and I re-read it and this book inspired me when I went off to Nashville, Tennessee. And it inspired other people." Interested fans can read the Martin Luther King comic book for free online or go check out March Book One at comiXology. You can view the full episode of The Colbert Report at the Colbert Nation website.