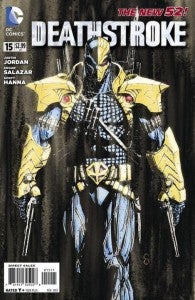 Scott Clark, the longtime WildStorm, Aspen and DC Comics artist, passed away yesterday, according to his Facebook page. He was 43.

Clark, who established himself with some smaller publishers in the early '90s, really became known through his work with WildStorm. After some time working on Marvel titles, he returned to the (now DC-owned) WildStorm universe after a brief fling with Aspen Comics and some work on DC company projects like Justice League: Cry for Justice and Brightest Day. Most recently, he drew the New 52 run on Grifter.

The news leaked via Clark's Facebook page (which is private) and began to filter through the comics industry after a number of creators on Twitter shared their condolences. A sampling of responses can be found below. ComicBook.com sends condolences to the friends and family of Mr. Clark.

"So my friend and artistic collaborator Scott Clark passed away last night," said David Beaty, who most recently inked Clark on Grifter. "It was a shock to his family and Micah and I. I've known Scott since the mid 90's. I was his background assistant on Alpha Flight. We became friends and went on do create art for Stargodz, Brightest Day, X-Men, Batman Inc, Grifter, Adventure Comics, Wonder Woman, and the list goes on & on. He fought to get me at DC and at Marvel. He was the biggest supporter of my work. And I of his. I don't know what this means for the future. Cuz things will never be the same for me. I will miss you Scott."

"R.I.P. Scott Clark. Comics will miss you," tweeted Oscar-nominated animator Shannon Denton, who has worked at Marvel and DC. "WildStorm on to whatever is next and condolences to all your family and friends."

"Just heard the news about Wildstorm alum Scott Clark. So, so sad. Heartfelt condolences to all his people," said RED co-creator Cully Hamner.

"Just read that the wonderful comic artist Scott Clark has passed away. Very shocking and sad news, my condolences to his family and friends," said incoming Vibe writer Sterling Gates.

"Really bummed to hear that Scott Clark has passed," wrote Masks & Mobsters's Joshua Williamson. "Wish the best to his family. He was a great talent."

Comics artist Josh Crews said, "Sad to hear about the death of Scott Clark. Talented comics guy. You probably have a book he worked on at some point..."

"Very sorry to hear of the passing of artist Scott Clark. His work was really excellent. He'll be missed," wrote Comicosity's Matt Santori-Griffith.

"My heart felt condolences to the family of artist Scott Clark. You will be missed terribly." -Writer/Podcaster Frankie Rodriguez

"Completely stunned at the loss of Scott Clark today," wrote Vibe artist Pete Woods. "He was only 43. I never met him- he left WildStorm before I got there, but by all accounts he was a nice guy and he was breaking new ground art-wise lately. My condolences to his family and friends."

We reached out to friends of Clark's to see whether there is a charity to which donations can be made in his memory. We'll update this story with both that information and more remembrances as we get them.