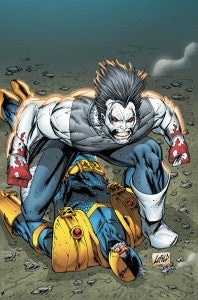 If you noticed that there was a lot of talk about the role of editors on a successful comic book yesterday on social networks, you're not wrong. Following on the heels of a tweet Thursday that saw Rob Liefeld (outgoing Grifter, Deathstroke and The Savage Hawkman) single out one of his editors for blame in his decision to walk away from DC Comics, a number of high-profile creators have taken to Facebook and Twitter to recognize the accomplishments of their editors--including, in some cases, the DC editor Liefeld complained about. The situation may have been exacerbated by the fact that Liefeld's tweets came within hours of the news that DC's digital editor Ben Abernathy was leaving the company for another job offer; Abernathy is well-liked and the rest of the night saw a number of creators make tributes specifically to him. "You guys have no idea how badly Ben Abernathy will be missed at DC," tweeted B. Clay Moore. "His efforts bordered on the superhuman. One of a kind editor." "That's what a good editor does," writer Ron Marz said in a tweet that Liefeld himself liked enough to retween to his followers. "helps you tell the best story YOU can tell. Comics as a whole is poorer for Ben Abernathy stepping away." But beyond Abernathy's many call-outs, the comics community seemed to use the long-standing Twitter tradition of "follow Fridays" to endorse their editors. Dozens of these tweets have rolled across our Twitter feed in the last few days, by writers and artists including Batman's Scott Snyder, Justice League's Jim Lee and Batgirl's Gail Simone silently addressing the concerns of Liefeld and others without actually engaging the argument directly. For the most part, that is. Marvel creators and especially editors seem to be taking a more aggressive approach to confronting Liefeld's version of the facts. "Based on Rob's tweets, I can only assume [Brian Smith] is a pretty decent editor," said Steve Wacker, while Liefeld reported that Tom Brevoort had been talking badly about him in the wake of the controversy. Veteran Marvel writer Brian Michael Bendis did direct some specific negative attention on Liefeld, tweeting about his editors and then following up with "@robertliefeld wow. shame on you."

Batgirl Directors Call Film's Cancellation a Traumatic Experience, Would Work on Another DC Film With One Request