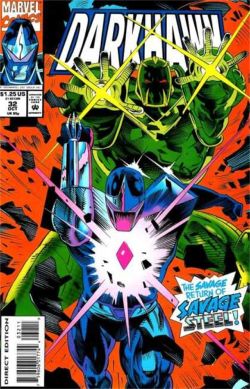 This article begins a new, recurring feature here at Comicbook.com. How many of us have scoured the dollar bins of our local comic book store, searching for a nugget of value, either monetary or story-wise? Part of the fun of digging through these often disorganized long boxes and bins is the chase and the sense of optimism you give a comic after mulling over the purchase before tossing it on your stack. "It's only a dollar, right" you may ask yourself.

This feature, Dollar Bin Discoveries, will hope to feature highlights from those bins. We'll present a brief summary of the story, the date of the issue release, and any other interesting features of the issue or notable guest stars. The final piece will rate, on a scale of .25 to the full $1.00 price, the "value" of the book. Would this be one to pick up at the full $1.00 price, or would it best be bought during the "4 for $1.00" days.

So, without further delay, I present the first installment of Dollar Bin Discoveries.

Summary: Could there be a more perfect character to kick off this feature than Darkhawk? This issue finds our 90's hero dealing with the return of sort-of hero, Savage Steel, a man who, in his quest for justice, can't guarantee that he won't kill the criminals he and Darkhawk encounter at the beginning of this issue. This issue also catches Darkhawk at a bad time personally. He's housing belongings in a port locker, his family is having hard luck, and he feels that he has nowhere to go. Much of the issue deals with the inner-monologues our hero goes through as he assesses his current predicament. After following him in dealing with his family's strife and in looking for an apartment, the story settles back on to Savage Steel and Darkhawk breaking up a plot by some Latverian extremists, of course, to blow up a large office building. Savage Steel flies off in the end, just as Darkhawk is about to hand over the men to the police. I'm surprised there wasn't a cameo by Doctor Doom at the end, but what can you hope for?

Issue Worth?: Well, all things considered, this reads a bit more like a scene from Hamelt with all the inner-thoughts than a comic book. It's not the greatest, but it's certainly not too many steps up from 'eh'.

Overall Worth .25 See if you can pick this one up when the local shop has a bulk sale, or spend the buck if you need this to complete your run.