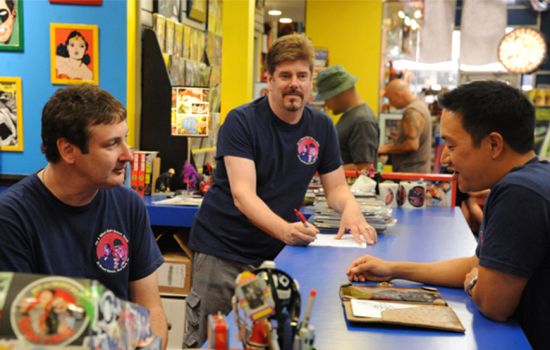 If you tune into AMC tonight at 9 PM ET expecting to see Comic Book Men, don't freak out when you see Freak Show airing instead. Comic Book Men has not been cancelled, it's just been moved to a new time. It's the same Bat-channel, it's just a new Bat-time, as Comic Book Men will be airing an hour later going forward. This week's Comic Book Men episode is called "Cryptozoic Men." According to the AMC description, "The guys try to create their own comic book. Walt buys a signed issue of Creepy." The "Cryptozoic Men" episode of Comic Book Men airs on Thursday, March 21 at 10 PM ET on AMC.