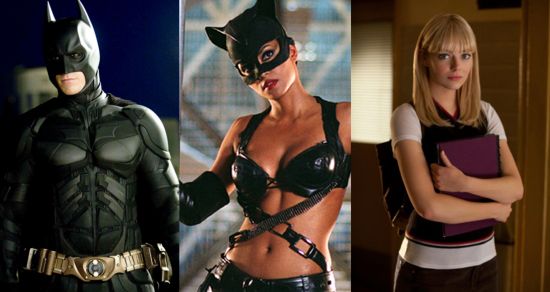 The Academy Awards are known for snubbing comic book movies. So it should come as no surprise that no comic book movies are nominated for Oscars this year. While it's not shocking that Green Lantern was overlooked for Best Picture, it is shocking that The Adventures of TinTin got overlooked for Best Animated Feature Film. It would have also been nice to see Michael Fassbender get some consideration for his role as Magneto in X-Men: First Class. Even though comic book movies didn't get any respect in the nominations, there are at least eight comic book movie stars who will serve as presenters at the 2012 Academy Awards. Presenters include Christian Bale who plays Batman, Halle Berry who has played Catwoman in the past, Natalie Portman who played Jane Foster in Thor, Angelina Jolie who played Fox in Wanted, Morgan Freeman who plays Lucius Fox in Nolan's Batman series, Gwyneth Paltrow who plays Pepper Potts in the Iron Man movies, Tom Hanks who played Michael Sullivan in Road To Perdition, and Emma Stone who will be playing Gwen Stacy in the upcoming Amazing Spider-Man movie. It's interesting to note that on the official Oscars page listing the presenters there is a brief blurb that mentions some of the past and upcoming projects for the actors and actresses that are presenting. Once again, the Academy snubs comic book movies by not mentioning any of them as projects of the actors and actresses presenting. Ok, we get and understand why it's not pointed out that Halle Berry starred in Catwoman, but how could the Academy fail to mention that Christian Bale is The Dark Knight? For Will Ferrell, they list everything from "Blades of Glory" to "Old School," and they don't bother to bring up Christian Bale's most famous role? Since it appears that the Academy is going to allow Sacha Baron Choen to pimp his upcoming movie The Dictator at the show, it will be interesting to see if some of the presenters mention their upcoming projects. It would be great to see Christian Bale stroll out in full Batman costume or make the nomination announcements with his Batman growl. It would also be good to see Emma Stone use her comedic skills to make some type of reference to her role in the Amazing Spider-Man. As far as Halle Berry, she would probably keep her mouth shut about the whole Catwoman thing. UPDATE: Breaking News - It looks like we might be down to seven comic book movie stars as presenters. Halle Berry has canceled her Oscars appearance due to an injury to her foot. According to People, she was chasing after her daughter who was chasing after a goat. This accident actually occurred six months ago, but she is reportedly still affected by the injury.

Comic Book Movie Stars To Present At The Academy Awards