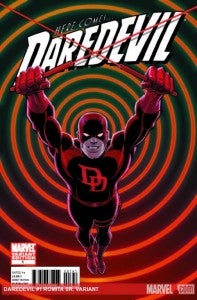 Well comic book readers, hope you're beating the heat as best you can! Perhaps you're taking shelter under the A/C, sitting by a pool, having a cold drink or some other diversion. Hopefully though, each scenario involves comic books! We're here once again to give you the scoop on the latest and hottest releases this week! First up is the return of a familiar face with Marvel's Daredevil #1! Mark Waid steps into the writing duties as Matt Murdock resumes his role as the protector of Hell's Kitchen. Be here for the relaunch of one of Marvel's signature heroes! It's a double dose of Avengers this week with Avengers #15 and Avengers Academy #16 both bringing you Fear Itself tie-ins! Hammer wielders are on the run, and it's up to the oldest and youngest Avengers to try and stem the tide of destruction!

Uncanny X-Men #541 brings the Juggernaut to San Francisco, and right to the doorstep of the X-Men! See what happens when he "politely" knocks on the door of their home city. Hulk #37 brings writer Greg Pak's storied run on the title to a close, as he once again faces a tough foe, the desires of others and himself! Over in the Ultimate universe, Ultimate Fallout #2 continues to deal with the shockwaves from the death of Peter Parker, and the end is just beginning! Meanwhile, X-Men #15 sees the end of the "First to Last" story arc come to a close. 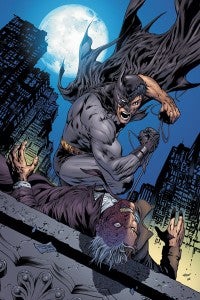 Over at DC Comics, Batman #712 gets things rolling this week, as "Pieces" comes to a close. Riddler! Two-Face! Batman! It's classic villains and storytelling at its best! Over in Supergirl #66, Supergirl must battle under a prestigious university, all the while not exposing her powers! Find out here how she does it! Deus Ex #6 brings to close the mini focusing on the adventures of Adam Jensen. The War of the Green Lanterns is over, and War of the Green Lanterns: Aftermath #1 starts to pick up the pieces in this two-part wrap-up limited series. Justice League of America #59 sees Eclipso triumphant, BUT he has one JLA'er left to contend with. Can she take him down? And if you're dying for more Flashpoint tie-ins, you're in luck! Legion of Doom, The Outsider, Wonder Woman and the Furies and The Flying Graysons all have their second issues debut this week!

Image Comics brings The Walking Dead #87 to shelves, bringing another issue in this story of survival. Need more gore and violence? Hack/Slash #6 has you covered! This issue sees the beginning of the "Fame Monster" story, as dreams of celebrity deaths begin to torment Cassie. Elephantmen #33 is another one to put on your pull list, and that is quite a full week for Image! Over at Dark Horse, it's another dose of Goon fun with the release of Criminal Macabre/The Goon: When Freaks Collide, which gives new readers for either series a great chance to jump onboard! Two Star Wars titles are out this week, with Star Wars: Jedi-The Dark Side #3 and Star Wars: The Old Republic-The Lost Suns #2 giving fans reason to cheer.

Stan Lee's Soldier Zero #10 leads the way for Boom, coupled with the release of Darkwing Duck #14! Over at Top Cow, it's time for Darkness #92, which takes us one issue closer to the milestone 100th issue! IDW brings vampire goodness with Angel Omnibus Vol. 2, which has dozens and dozens of pages of brooding detective work to readers! Also from IDW is the latest in Locke and Key with Locke & Key Clockworks #1. The first of a six-part new series! Last but certainly not least, Dynamite Entertainment brings us Red Sonja: Revenge of the Gods #5, along with Warlord of Mars #8!

Get some shade, readers! Keep tuned here next week for more previews!