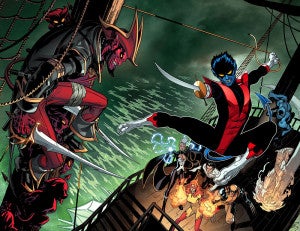 This weekend at San Diego Comic Con International, Marvel Comics surprised fans with the announcement of a new X-Men series--one that will feature Nightcrawler, a character who's been gone for quite a while now, at least by X-Men standards.

The series, Amazing X-Men, will be written by Jason Aaron and feature art by Ed McGuinness, whose wraparound cover can be seen at left.

“Nightcrawler has always been my favorite X-Man, so I've been planning this story for years now, going all the way back to Wolverine and the X-Men #1,” explained Aaron. “I'm thrilled to be bringing Nightcrawler back to the forefront of the Marvel Universe. Of course it may not be much fun for the X-Men, once they realize what they'll have to go through to rescue their friend.”

The book will also star Wolverine, Storm, Beast and Iceman, making it essentially an "X-Men All-Stars" team at least at its launch.

“Get ready for the most epic book at Marvel, where every arc is an event!” said senior editor Nick Lowe. “X-Fans know Jason Aaron, but I can't wait until they see Nightcrawler fan #1 Ed McGuinness' incredible first X-Men book!”

You can check out solicitation information for #1 below.