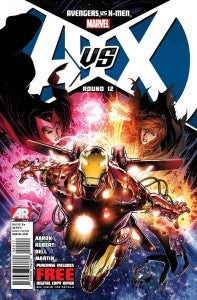 Joe Quesada continued on an annual tradition today at Comic-Con, hosting the annual Cup O' Joe panel, where Marvel rolls out some of its freshest, newest and upcoming ideas for soon and on down the road.  C.B. Cebulski was on hand along with Jeph Loeb, as well as Editor-In-Chief Axel Alonso. Alonso said that the Marvel Now! Universe will be molded and shaped based on the events that happen in Avengers vs. X-Men storyline after it wraps up in September and that, as we already know from previous posts, the Marvel team will roll out a few new number one issues over the course of the fall as part of that new initiative.  They also mentioned that those number ones would come with Easter eggs of the digital kind with videos, AR activation specials and more.

Uncanny Avengers is a book where the team is equally comprised of X-Men and Avengers, said Alonso.  "This will have a seismic impact on the Marvel universe and they will learn the reason that they're being put together as a team is much bigger than they imagined."  Marvel Now! Point One  will return in October and have five stories in it  with Nick Fury Jr. The only teaser revealed is simply "Diamondhead".  "Google it" Loeb told the crowd.  (To help you out, the character appeared way back in Nova issues of the past and was created by Marv Wolfman and Sal Buscema)!

Avengers + X-Men will launch in October which will show the flipside to Avengers vs. X-Men. The creative team for that book will be Dan Slott, Dale Keown and Ron Garney.  In October a new limited series called Avengers vs. X-Men: Consequences will deal with the fallout of the events from the mega series.  A more tongue in cheek one-shot, Avengers Babies vs. X-Men Babies will be released in October, due to the demand for the Skottie Young artwork of the series.  The panel then turned to fan questions that ran a wide range of Marvel topics.

The first character-centered question focused on what would be happening with Quicksilver and the Scarlet Witch.  "Scarlet Witch is really too entrenched in Avengers vs. X-Men to spill too much about her at this time," said Quesada, and he didn't want to comment further about aspects of her possible use in film properties because of the crossing of boundaries there.  The eventual question of Jean Grey came up, this time in reference to when exactly she would be appearing in the Marvel Now! stories.  Alonso answered, "It involves the original X-Men traveling through time and coming to terms with what the future looks like.  For the current X-Men it’s Wolverine looking at the young Jean Grey and...not like that!” The crowd responded with quite a bit of laughter.  Quesada added that they're calling it essentially "Days of Future Now."

The conversation then turned briefly to animation and the transition from the cartoon Avengers: Earth's Mightiest Heroes to Avengers Assemble.  The panel discussed that doing fifty-two episodes, as they did with A:EMH was a huge undertaking and that since the film Avengers did so well they were going to transition to an animated team that better reflected what was happening in the movie.  They also acknowledged that they were not going to wipe out the history of the new show's predecessor.  Discussion turned to just who could be the figure in the chalk outline on the cover of Avengers vs. X-Men: Consequences, with some musing if it might be Cyclops.  "I’m not going to tell you if he’s the guy in the chalk outline, but whether he lives or dies he’ll cast an interesting shadow over the X-Men’s world,” Alonso said.

Talk then turned to the new Hulk of Marvel Now! “It’s a very new, unprecedented dynamic between Banner and Hulk,” Alonso said, adding, “What’s planned is one of those ‘oh shoot’ moments!”  Arune Singh pointed out that Hulk has a different look for a reason and that will be explored as Marvel Now! gets underway.  One fan got up and asked about a section of the Marvel universe that had been on some fans minds for quite some time, especially those who are fans of the Loners: what happened to Red Ronin and just who exactly is Hollow?  Cebulski noted that Red Ronin is still out there and that something would be coming up with one of those characters soon.  The audience was then teased about the cosmic characters in Marvel's world, with an announcement planned for either Saturday or Sunday about characters that would be involved.

The panel wound down with announced plans for X-23 to return to a regular role, although probably not in a solo book.  Also, Ultron will be returning to the Marvel universe in a very big way.