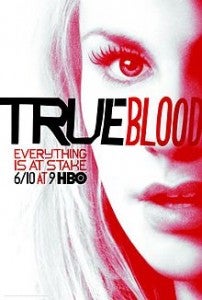 A massively packed house was on hand in Ballroom 20 for the eagerly anticipated panel of the HBO hit series True Blood.  On hand were series creator creator Alan Ball, actors and actresses Anna Paquin, Stephen Moyer, Ryan Kwanten, Sam Trammell, Rutina Wesley, Deborah Ann Woll, Joe Manganiello, Chris Meloni, Alexander Skarsgard and Kristin Bauer van Straten. The often hilarious panel was moderated by Entertainment Weekly's Tim Stack.  The panel began with Stack asking about what has made this season an interesting one for some of the case with people working together perhaps for the first time.

Ball said, "We're always looking for ways to put new combinations of actors together, and sometimes that new chemistry that develops between characters is exciting."  For the new dynamic between Pam and Tara that exists, Rutina Wesley said, "It's been a joy this season just to have fun being a new baby vamp.  I really like it."  For the dynamic that's changed between Eric and Bill, Skarsgard said "We've had too much fun together and it's been four years of us fighting over Sookie and now there's a sort of a Butch Cassidy and Sundance Kid feel to it.  Moyer added to that, "I think the characters have to join together, and put all that animosity aside and I feel that when they work together in that way, as a team, it works."  Ball chimed in, "The first day we shot the trunk scene with Eric and Bill, they could not stop laughing and it took forever to shoot that."

Van Straten was asked about Pam's wardrobe this season, with the tongue in cheek suggestion that it's become more of a conversation piece.  Who came up with the Wal-Mart sweat suit idea, Stack asked.  "That starts with the writing.  It starts with that brilliant line, then it goes to wardrobe.  There's a rack of Wal-Mart sweatsuits that we were going to try out.  We started with the yellow one, and I didn't think we needed to look any more after that."  Van Straten was asked if there was a particular part of Pam's wardrobe she loved  "My favorite is the one I'm wearing in the moment, because Pam is always topping herself."  Trammell interjected, "I loved the red sequin jumpsuit.  I have never forgotten that, even though that was our only scene together in the show thus far."

Wesley was then asked about the direction of Tara's character. Is Tara exploring a different side of her personality? "I have a feeling that Pam is having an influence on Tara," said Wesley, "my mother called me and said 'that corset! What!' It's been fun to dress up this year and have some things hang out as it were." After some joking a "body rolling" contest began to break out amongst the panel, with Maginanello, Wesley and even Ball gettin in on the act.   Moving along, Ball discussed one of the newest parts of the setting of the show, the fairy club  "The strip club this season will not see Claude stripping per se, but we will see other fairy people in various stages of undress this season. We had done fairies a few times, with fairies skipping through a field, and again with the tree and everyone was in white.  It didnt' feel like our show.  We started thinking about refugee fairies and what they would do.  We decided that they are creatures where shame and guilt are looser, and fairies are sensual.  We thought of a place in the club where humans and fairies are just hanging out and having a good time."

The topic of Sam Merlotte's love life came up, which has not been very successful. Will this season be the end of Sam and Luna?  "I can't tell you that at this point, I have to survive the episode," said Trammell.   Jason and Jessica's Rock Band episode got some discussion.  Are the actors just that good at Rock Band?  Kwanten said,  "I did a lot of practice for that, but it was for a different version of the song.  You, Deborah, were on fire"   Woll said, "I practiced a lot for that.  The singing was the only thing that we did live that should have been good."  The Jessica and Jason storyline has been developing, but are they really in love?  Woll said, "I'm having fun with it.  It's a great storyline.  I look forward to it all the time, and we'll see where it goes."

Rev. Newlin's return as a gay man caught some attention, but where was the motivation?  Ball said, "We didn't make a conscious decision, but the way he looked over Jason, that energy was kind of there in Season Two.  When he was made a vampire, he probably felt strong enough that he could go after him now in that way."  A question from the audience came about this time, with a question for Chris Meloni about the differences between SVU and True Blood.  "The sex crimes on this show are very different!" he joked,  "It's an absolutely interesting world to be a part of.  I had never even heard of werepanthers before and once you accept that it's great. It was really cool to be a vampire, but I defintiely wanted to stake some one. I knew that when I signed on.  It's messy when you see it done.  It's awesome because it's very technical, different camera angles, and the kid I staked on the show didn't actually explode."  Woll quickly chimed in "you didn't do it right" to loud laughter.

Sookie has gotten more kick ass, a fan noted, any big throw downs this season.  "I can't tell you about fairy throw downs specifically, but she always finds herself in the middle of dangerous situations and such.  She may get drunk again after the first hangover passes," Paquin said.  Are we going to see more Stackhouse parent flashbacks, another fan asked?  Ball said,  "Yes, you will see more about the parents, more flashbacks.  You're going to learn more about Sookie and Jason's parents and how it has affected them."

The subject turned to Stephen Moyer directing True Blood. " I was very nervous and uncertain about it, but I knew I wanted to do it.  I think it turned out really well but it was definitely a lot of pressure on myself to do well. I had my own theater company for ten years and it's something I've wanted to do again for a long time.  I asked Alan again and again and he said no.  Basically it's up to Alan and I asked him at the end of the first season," said Moyer.  Ball said that one thing that Moyer had done to convince him was to decide to shadow the workers on the set to prepare for the task. "I was blown away that he was acting on the show, editing pieces of the show, and doing so much behind the scenes work on it with all those things going on," said Skarsgard, "He really does care about the relationships on the set.  He came prepared to the set but was willing to throw that away if it wasn't working."  Van Straten agreed as well, "Stephen is someone I'll go to with at line and say 'listen to it this way, and then this way.' and he is someone I trust.  It felt like a reasonable transition to him directing and I just loved it."

What does the episode he directed deal with? Moyer was a little cagier. "I adore Sam Trammell.  He has one of the toughtest jobs in my episode, and he gets to work with another actor I just mentioned, I won't say who, and it's tough.  And to do what he did with it to get what we needed to get was great."  Trammell discussed that as well,  "It was fun with him. Our show is so huge and for Stephen to do preproduction while shoot, and do post-production, and there's so much going on that I was impressed."  Ball also mentioned that hearing so much from the crew about Moyer's work with the actors is part of the reason that he game him a chance in directing True Blood.

Another question from Stack asked how fun has it been to explore Pam and Eric backstory? "We kept asking for years what our story was, and it was so fun to read it, and so fun to picture myself in 1905 in wardrobe," said van Straten, "It was so much fun and I thought the writing was great and why she's so happy to be a vampire and so unsympathetic.  It's really lovely to get to work with someone you like and that you love even though they can be a pain in the ass is a lucky thing.  I look at what I can get out of the scene and I am really, really lucky that this guy was my maker."

Touching back on Pam a bit and how she is with Tara, Wesley was asked about Tara's transformation. "It's been awesome.  I've gotten to recreate Tara and she has this incredible strenght that she's not even aware of yet.  I think she's starting to get it and I think having Pam as a maker and seeing that caring side of her is different.  Whether Tara wants to admit it or not her life is insane.  It's been an incredible journey.  If you had asked me four years ago where my character would go, I could never have thought of that." Ball discussed the motivation for adding Tara as a vampire.  "We had the story of a young vampire with Jessica, but we thought what if you took someone who really hated vampires with a good reason and turned them, how would that play out?  We thought it would open a lot of doors for Tara, so we always knew she would head that way."

The cast was then asked about any gross out moments?   "I remember at the end of season one and Bill was burning and it was disturbing," said Trammell, "He wanted to have lunch and I couldn't even look at him.  It was upsetting."  Moyer chimed in,"They got better and better at getting the burned flesh pieces and you see that in season three. More questions from the audience asked about elements from the novel, such as the weretiger?  Ball said, "No plans for that, but the new writers may choose otherwise though."

Three new romances this season were teased as well by Ball.  What about chances of seeing fairy war in the television series? Ball said, "We have at least two seasons, maybe three left, but I think there's a chance of seeing that."  The cast was then asked memorable moments Magianello said, "Valentines' Day last season at the lake.  Two naked dudes screaming "I'll f---ing kill you".  That's True Blood for me."  Woll mentioned "Episode ten of this season for me" Kwantan added "Wearing the He-Man onesie.  I was always a fan of him growing up.  Here it is 20 something years later and I'm wearing one."  Anna Paquin added her own piece to this, "The last scene of this season for me, which I obviosuly can't say anything about"  Skarsgard mentioned "The Godric death scene was my favorite.  We shot it in downtown LA and only had 20 minutes to shoot it.  We rehearsed all night and it was such an emotional moment."  Van Straten closed things out by saying, "I think a lot of our scenes are so big, and we shoot them out of order, but the ones where you can feel a flow to things are really nice."