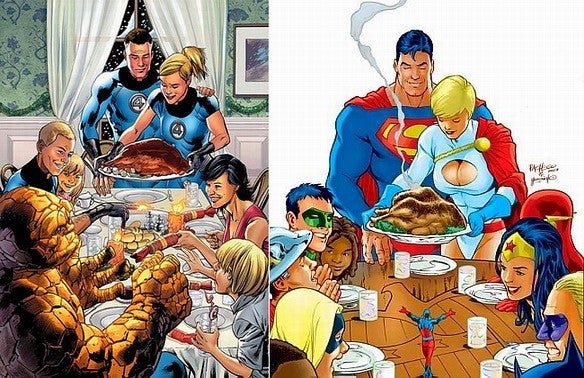 Backyard football. Sacred family recipes. Playing tug-of-war with a turkey wishbone. Thanksgiving is a holiday built on traditions, a tribute to all that we hold sacred and refuse to compromise on. Ask any family, or any individual for that matter, and they’ll share a special tradition that’s as essential to their Thanksgiving celebrations as eating a turkey (or some soy-based turkey subsitute, if that’s their thing).

Comic book creators are no different. When they’re not chasing down deadlines in between bites of cranberry sauce, some of the biggest names in the industry hold traditions that make the holiday distinctly theirs. In honor of Thanksgiving, some of DC and Marvel’s top talent shared their fondest traditions from Turkey Days of old and new.

Backyard football. Sacred family recipes. Playing tug-of-war with a turkey wishbone. Thanksgiving is a holiday built on traditions, a tribute to all that we hold sacred and refuse to compromise on. Ask any family, or any individual for that matter, and they’ll share a special tradition that’s as essential to their Thanksgiving celebrations as eating a turkey (or some soy-based turkey subsitute, if that’s their thing).

Comic book creators are no different. When they’re not chasing down deadlines in between bites of cranberry sauce, some of the biggest names in the industry hold traditions that make the holiday distinctly theirs. In honor of Thanksgiving, some of the industry's top talents shared their fondest traditions from Turkey Days of old and new.

Justin Gray (Writer - Star Spangled War Stories, Lone Ranger, All-Star Western):
I used to work every Thanksgiving. I also worked New Years Eve, New Years Day, Fourth of July, Halloween and the occasional Christmas. During the years I spent toiling in the restaurant industry Superbowl Sunday was my Thanksgiving. When I left that life Thanksgiving became what it is to a lot of people – driving from one house to another to eat, drink and watch extended family try to kill each other. If I had an ideal Thanksgiving in mind, I would be home, cook for a ton of friends and family, watch football and when the house finally quieted down and everyone was full and mostly drunk we could watch Planes Trains and Automobiles or Beautiful Girls.

Frank Tieri (Writer of Red Sonja: The Black Tower, Axis: Revolutions; Former Writer on Savage Wolverine)
Over the last few years I've added a new wrinkle to my annual Thanksgiving traditions of watching football and arguing with my family—and that's frying the turkey. Despite everyone—including me—thinking I was going to burn the house down at some point... so far so good. But of course now that I've said that, this is the year I kill everybody. I wasn't so lucky a few years back with another recent addition to my Thanksgiving table-- and that's my White Castle stuffing. Look, it's White Castle burgers and shit like mushrooms and onions and sage all thrown together in stuffing form--it’s ****ing delicious. I mean, how can you go wrong with that? I'll tell you how. When you eat a giant bowl of it like a gluttonous asshole the day after Thanksgiving at 2 in the morning and end up in the hospital with a gall bladder attack and eventually have to get your gall bladder yanked, that's how. Was it worth it? Well, I never stopped making it, so yeah. Now let's see what else those bastards can cut out of me this year!

When I first moved to New York City, life was a bit nomadic. I worked peculiar jobs and found odd places to stay, but eventually got a job at Marvel Comics and moved into an old factory downtown, although one could say the endpoint remained peculiar. The space was originally a cheese factory, later turned artist’s loft. By then I'd made a passel of friends, including immigrants who lived in boats on the Hudson River. When the holidays rolled around, I realized many of them couldn't afford to go home to their families, and none of us had yet created our own indigenous families.

I decided to host what I called Misfit Thanksgiving. If you had nowhere to go, you were invited. The first year I cooked for about 20 people. By the next year, word had gotten around and it doubled; the following year it tripled. It was a potluck, so everyone brought something. The Hungarians made mulled wine and goulash. The fishermen brought sacks of oysters. My Polish friends brought strange cakes and stewed fruit. I'd put a turkey in the oven the night before, a roast at dawn, a ham at noon.

Eventually the misfits started families. Those who needed a place for the holidays diminished. If you're young and have the Misfit Thanksgiving spirit in you, call around and find those who have nowhere to go on the holidays, and create a misfit family out of the odds and ends of life. Today, my Thanksgivings are a round-up of the usual suspects, and they are wonderful. But I miss those massive Misfit Dinners.

I will drive down to my in-laws’ house, then scout around for a local comic shop in which to purchase the week’s books.

My family always has a traditional, Southern Thanksgiving and that means potluck dinner with everyone bringing too much food. My sister is an amazingly creative cook. She makes exotic things like Japanese sweet potatoes with Wasabi butter. Mom makes hashbrown casserole, green bean casserole, cranberry salad—you know, anything that cooks a vegetable to within an inch of its life and smothers it in Campbell’s Cream of Chicken and sour cream. Well, not the cranberry salad. No condensed soup mixed in with the cranberries, though it’s entirely possible that sour cream makes an appearance.

My dad has a degenerative illness called Lewy Body Disease. It’s the same ailment that Robin Williams suffered from. Dad is an actual rocket scientist, one of the smartest, kindest, most interesting people I know, but we are losing him more and more quickly now. My favorite part of Thanksgiving right now is getting to talk with my father. I’m not entirely sure if he’ll know me by next year, but we have now, this moment. I intend to cherish it.

Mike Allred (Artist of Silver Surfer)
Our house has become the gathering place. An honor and a joy. Of course Laura does all the heavy lifting. It's all pretty traditional. Lots of great friends and family enjoying each other and way too much awesome food.
I often refer to it as "pie day" since Laura goes crazy with the pies. Custard, lemon Meringe, chocolate, butterscotch, pumpkin, apple... She uses my mom's crust recipe, and I have never tasted better pie anywhere by anyone.
Laura also makes the best mashed potatoes in the world. Everyone who has tasted them agrees. We also moved into our "Dream House" just before Thanksgiving, so every year is a celebration and the perfect anniversary for being thankful.

Scott Allie (Editor-in-Chief, Darkhorse Comics)
In my bachelor days I spent some Thanksgivings at Dark Horse VP of Publishing Randy Stradley’s house with a bunch of other comics orphans. Nowadays my very extended family gets together at my wife's parent's house. This year my wife, Elisabeth, decided to host a leftovers party at our place that'll no doubt bring a bunch of the local comics folks around.

I like to combine large quantities of pie with Kentucky bourbon.

Paul Mounts (Colorist, Various DC and Marvel Comics)Thanksgiving has always been a huge tradition around Mounts Manor, from the traditional Most Dangerous Game hunt to the Lighting of the Forty Meter Thanksgiving Pyre, where the annual sacrifice to the Autumnal Maize Gods always insures a holiday with no convictions ( in every sense of the word, of course). And to see the faces on the local orphans as the Monsanto truck pulls up with our genetically modified 430 pound turkey (this year, unfortunately, doesn't seem to be on track to top last year's bird. Scientists say you can only push a turkey so far. Scientists are wrong and will pay). Grandma's Yacht of Stuffing and dear Aunti Pasto's gold salad trough add to the fun, and the Peshtigan warriors, replete in their traditional warpaint and dress help to complete the feast with the gravy pyramid! After dinner (and a trip through the always-necessary Pumpkin Pie wing of the estate), we retire to the backyard stadium, where the Chicago Bears will get sadly beaten by the Detroit Lions, whereupon it's off to the abattoir for them!

Or maybe I just usually heat up a frozen dinner and watch Planes, Trains and Automobiles.

It's one of these two. I just get them confused.