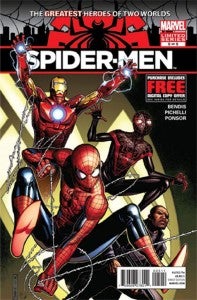 The Spider-Men limited series wrapped up its five issue run this week. If you haven't read the issue yet and still plan to do so, then be warned that we've included a little bit of a spoiler in this article. While the entire series has been an enjoyable and fun read, it's really the very last page of issue #5 that drops the real bombshell that could have future repercussions on the Marvel 616 Universe. After the events of the series, Peter Parker relaxes with a hot shower and a candy bar. Then, a question hits Peter Parker's mind that comic book fans have been wondering about for awhile. Is there a Miles Morales on Earth 616? When posed with such a question, Peter Parker does what any resident of Earth 616 would do. He searches for Miles Morales on Google. While the Google results aren't revealed, Peter Parker's face tells the story. A stunned Peter Parker looks at the screen with eyes wide open and mumbles, "Oh my god." So what does Peter Parker see? Is writer Brian Michael Bendis laying the groundwork for another crossover or something more? Give Peter Parker's stunned reaction, it's obvious that Miles Morales must exist on Earth 616. If Miles Morales does indeed exist on Earth 616, could he eventually replace Peter Parker in the main Marvel Universe? There has been a lot of speculation that Marvel might kill-off Peter Parker and replace him with someone else in Amazing Spider-Man #700. Most of the speculation has revolved around Alpha being that replacement, which might very well be the case. However, Alpha seems like the obvious choice that is being set up to take over as Spider-Man. If Marvel really wanted to shock people, then Miles Morales of Earth 616 would be the unexpected choice. Not saying it's going to happen, but the last page of Spider-Men #5 seems to at least set up the possibility. 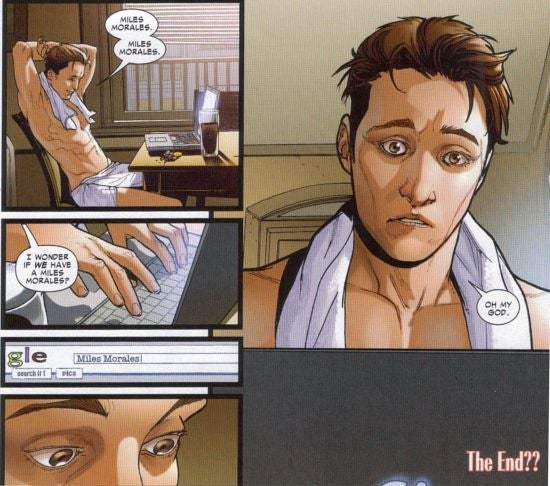 Could Miles Morales Replace Peter Parker As Spider-Man On Earth 616?