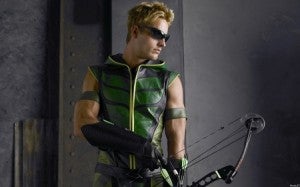 According to Entertainment Weekly, The CW is closing in on making an order for a pilot based on DC Comics's Green Arrow from Greg Berlanti and Marc Guggenheim. The pair should be quite familiar to comic book fans--not only did they work together on the Green Lantern feature film, but Guggenheim has worked on a number of TV and comics projects, including a fairly popular run on The Flash: The Fastest Man Alive, in which he had the unenviable task of taking over a failing book from an unpopular creative team for just long enough to kill the main character. The character was featured prominently on the network's recently-concluded hit show Smallville, but as yet Justin Hartley, the actor who played Oliver Queen on that show, is not connected to the new project. With the rights to Batman tied up in the film franchise, it's widely believed that Oliver was added to Smallville to fill the role of the street-level superhero who kept Clark honest. The character (and actor) became one of the most popular and enduring characters on the show following his introduction in 2006. A Green Arrow movie, titled Green Arrow: Escape From Super Max, is still listed by the Internet Movie Database as being "in development," although it has been stalled for years, lifting its head only occasionally to proclaim that it's not dead yet like a Monty Python character.. Spearheaded by veteran comics-to-film writer David S. Goyer, the film reportedly revolves around the hero escaping from a prison filled with B- and C-list supervillains. Oliver Queen, a billionaire who uses skills gained while stranded on a desert island (and, in later days, all the gadgets his family fortune can buy) to fight street crime while using his public profile to fight white collar crime both in and out of costume, is probably best known to many readers as the liberal half of the classic Denny O'Neill/Neal Adams Green Lantern/Green Arrow run from the 1970s. That series imbued Queen with a unique personality and informed virtually every take on him that came afterwards. Last year, the New 52 initiative saw his long-running series relaunched with a new #1 and Oliver was one of the most drastically altered of all of DC's titular heroes. The title has already gone through three creative teams after writer J.T. Krul left the title to work on the upcoming G.I. Combat with artist Ariel Olivetti. His temporary replacements as writer were series artist Dan Jurgens and O.M.A.C. co-writer Keith Giffen. When that pair left Green Arrow to take on Superman, they were replaced by former Marvel editor Ann Nocenti and artist Harvey Tolibao. Green Arrow is at least the fourth DC character (behind The Spectre, Deadman and Booster Gold) to reach this putative stage of live-action development recently, although none of them have moved forward from the pilot order so far.