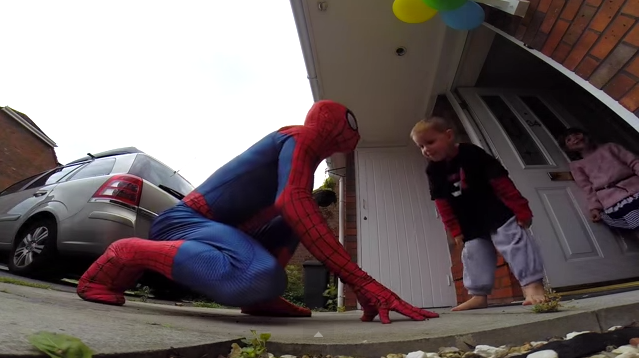 United Kingdom citizen Mike Wilson dressed up as Spider-Man this past weekend to surprise his son, Jayden, for his fifth birthday. Sadly, Jayden was diagnosed with a Grade Four Brain Stem Tumor last September, an illness that generally gives victims just one year to live.

Wilson set up a Go Pro camera outside his front door, and had his wife bring Jayden outside. Then, Wilson jumped off of his roof in front of Jayden, giving his son the ultimate Birthday surprise. Wilson asked Jayden how he’s doing, and how old he was on his birthday. Giving Jayden a big spider-hug, Wilson then carried his son back inside to the birthday party. In an interview with The Independent, Wilson said that he had the Spider-Man costume custom-made by two costume designers, who took about three weeks to produce the high-quality suit.

Since Wilson posted the video on YouTube this past Sunday, it has attracted more than 1.1 million viewers and small media frenzy. Now better known as “Spider-Dad,” Wilson is using the video’s popularity to help raise awareness for his son’s battle.

“He's such a little hero and we want the world to know about his journey,” Wilson told The Independent, “As well as to see the Spider-Man video and generate inspiration from it, so that kids have dreams made realities.”

Check out the video of Spider-Dad in action, below.

A GoFundMe page has been set up in Jayden’s name, for those who wish to help him through his diagnosis.

Magic Order Back in Development at Netflix According to Mark Millar

PlayStation Plus: Everything You Need to Know About May 2021's Free Games