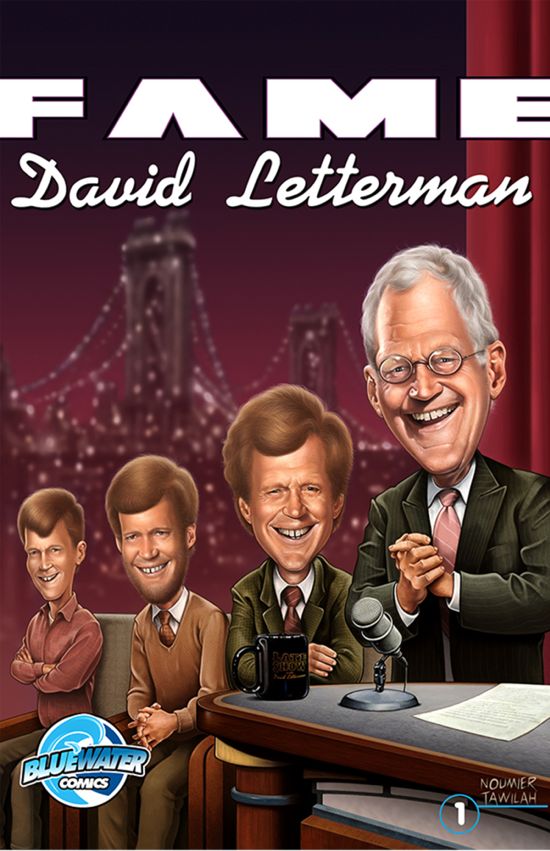 Bluewater Productions has announced that they will be producing a biography comic book about David Letterman. The new comic book is part of their FAME series and will be called FAME: David Letterman. The bio comic is set to be released on March 13, and it is written by CW Cooke with art by Noumier Tawilah. According to Bluewater Productions, "David Letterman is the true king of late night comedy. Right behind Johnny Carson, one man has been consistently funny, charming, and downright easy on the eyes since the dawn of his days. David Letterman might have a weird knack for comedy, but his story is something to behold. Come take a look at the man behind 'Stupid Human Tricks', 'Top Ten Lists', and 'Will It Float?'" "Letterman's story is a pretty amazing one  and yes we do address the late night wars in this comic book, I think they were an important part of television history," said publisher Darren G. Davis. "I had quite a lot of fun working on the David Letterman book. As part of that, I watched a lot of shows and went through tons of screen captures to catch the essentials of Dave and his guest's expressions. During the coloring of the book, I came up with a color palette inspired by the original colors of the show, thus giving readers the show's feel and breath while reading the comic," said artist Noumier Tawilah The David Letterman comic book is available in print exclusively at Comic Flea Market. Bluewater already released a comic book on another late-night host, Conan O'Brien. Both are available on Amazon as well as Nook, Kindle & ITunes.