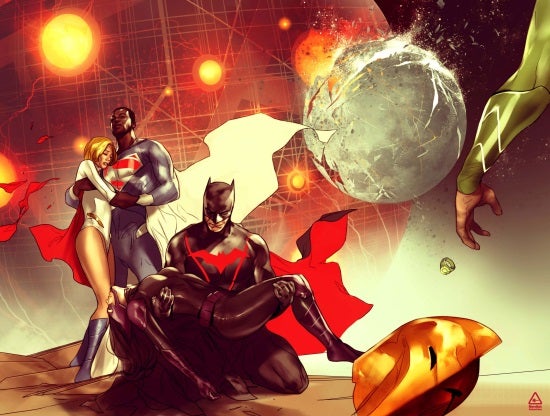 DC Comics has announced (via Nerdist) Earth 2: World's End, a new weekly comic book series featuring the writing talents of Daniel H. Wilson, Tom Taylor, Paul Levitz, Marguerite Bennet, and Mike Johnson and the artistic talents of Eddy Barrows, Jorge Jimenez, Stephen Segovia, Paulo Siqeira, and Tyler Kirkham. "This has been a charmed opportunity to jump straight into the deep end of a gritty, complex DC Comics series," said Daniel H. Wilson, who will work on the series in the capacity of a "showrunner." "I feel incredibly lucky to work with Mike Cotton and the rest of the legendary DC team, figuring out the ultimate fates (and sometimes origins) of so many compelling Earth 2 characters in crisis. I'm having the time of my life." Earth 2 is a DC Comics series that takes place on an alternate Earth from the mainstream DC Comics universe. In Earth 2, the most iconic DC Comics heroes – Superman, Batman, Wonder Woman – all seemingly sacrificed their lives to stop Darkseid's invasion of Earth. With the trinity gone, a new generation of heroes rose to take their place. World's Finest, starring Power Girl and Huntress, takes place in the same world. The teaser image for the series shows Doctor Fate's helmet lying on the ground, Huntress lying limp in Batman's arms, planets exploding and what might be Apokalips in the background. Earth 2: World's End will begin in October. It is the third weekly comic book series on DC's schedule, following Batman Eternal, which began last week, and The New 52: Futures' End, beginning on Free Comic Book Day, May 3.