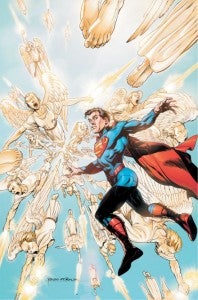 With the New 52, there have already been a lot of changes for the Man of Steel, but DC Comics doesn't appear to be done yet. In a recent announcement, DC Comics is teasing that the back-up story in Action Comics #14 will contain a game changing storyline for Superman. The backup story is called  "Star Light, Star Bright…" It is being written by Sholly Fisch with artwork by Chris Sprouse and Karl Story. In the story, Superman makes a mysterious trip to an observatory. According to DC Comics editor Wil Moss, "The back-up in Action Comics #14 is a really terrific little story, but we can't tell you much about it yet. All we can say is that it's IMPORTANT! Historic, even! Superman has been making these regular trips to an observatory. But why? What is he searching for? Find out this November … and wait'll you see who's helping him!" So why would Superman need to go to an observatory? Could he be looking for something related to his homeworld of Krypton? Or is it something else entirely? Action Comics #14 is scheduled to arrive in comic book stores on November 7, 2012.