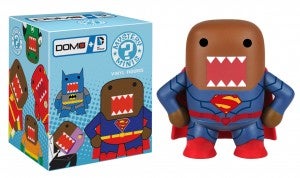 When ComicBook.com last reported that DC Comics was planning a line of Domo toys wearing their superhero costumes in cooperation with Big Tent Entertainment, all anyone had yet seen was a couple of Domo photos from a USA Today article, the takeaway of which was that Superman and Batman would be wearing their classic "underwear-on-the-outside" costumes.

Not so much anymore, as we've now got a full gallery of the DC/Domo figurines, including New 52 looks for Robin, Superman and more.

“The ability for Domo to become literally anyone or anything has always been a cornerstone of the brand,” said Richard Collins, Chief Executive Officer, Big Tent Entertainment. “We feel this partnership with Warner Bros. Consumer Products is the perfect project as it gives Domo a new exciting world of characters to play off of and opens him up to DC Comics’ vast loyal fanbase.”

The Domo toys are available at a number of retailers who don't ordinarily carry DC Direct or DC Collectibles toys, including Barnes & Noble. The line will be composed mostly of 1" "mystery boxes" with no guarantee which figure you'll get in the box. The only toys to come in a full 4" size will be Superman, Green Lantern, Flash and two Batman looks--the "classic" blue and gray and the Dark Knight-inspired black.

Check out the full gallery below.