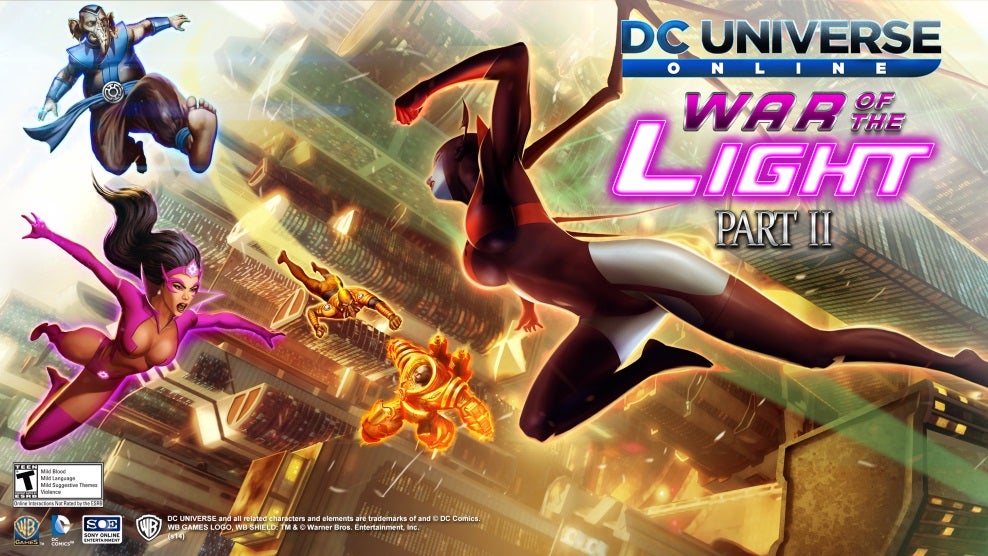 DC Universe Online, the free-to-play DC Comics superhero MMO, is getting ready to introduce its twelfth storyline DLC expansion back, and the good folks at Sony Online Entertainment gave a tour of some of the new content that will be available ahead of the DLC’s release. Good things are coming for DCUO players in War of the Light Part II.

War of the Light Part II is the second chapter of one of three story based DLC trilogies that DC Universe Online is currently releasing, with the other two being Amazon Fury and Halls of Power. It’s a smart format to use, allowing the developers to build ongoing stories without leaving players who may not be a fan of Green Lantern or Wonder Woman starved for other content. It also helps recreate the feel of the actual DC Comics Universe, where there’s always multiple different storylines being told.

To recap, War of the Light Part I saw Mogo and Ranx appear over Metropolis, just as mysterious colored mists began spreading in the city. Using Mogo and Ranx as bases of operations, the heroes and villains respectively began investigating these occurrences, revealing that Corps’ power rings had become undependable, and that their Entities had gone missing.

War of the Light Part II will reveal what has caused all that, which ties back into DC Universe Online’s very first DLC, Fight for the Light. Brainiac’s attempts to digitize the emotional spectrum in that DLC disrupted the Entities, atomizing them and leaving them in the form of the prismatic mists. The Entities have retained some of their sentience, and are trying to alert their Corps to what has occurred by possessing their Iconic hero and villain allies, like the Flash

During the course of the DLC, players will aid the Corps, particular the Green Lantern Corps and the Sinestro Corps, as they try to reignite the light of their Entities and power batteries. While several of the Corps’ leaders, like Hal Jordan, Sinestro, Saint Walker and Atrocitus, have begun together to solve the crisis, the rank-and-file corpsmen can’t help but act on old enmities.

Someone they must find a way to get ahold of their Entities, return them to their power battery, and reignite the light. But things become more complicated. Rival corps are trying to plant an impurity made of different colored mists in their enemy corps’ batteries, in order to create a weakness like the weakness to yellow that Green Lantern’s had when Parallax was trapped in their Power Batter. Players will actually come face-to-face with certain entities, including Ion, Parallax, and Predator.

War of the Light Part II will also introduce a new Corps into the battle, the Star Sapphires, who have come to Earth both because Predator is missing, and because of the threat the ongoing war between the Corps poses to love.

So what will this epic storyline offer in terms of new gameplay? War of the Light Part II will feature four new instances. There will be a new single player challenge called “Spark of Parallax,” which has players visiting Qward in the Antimatter Universe. Qward houses the Sinestro corps battery ring, and the Red Lantern Corps are trying to infect it with a red impurity, a detail that will become important later on, and will see players coming face-to-face with Parallax.

A duo instance places a player and a partner on Oa, where the Green Lantern Power Battery is under siege by Larfleeze and his “Orange Lantern Corps.” Players will have to reignite Ion, and will have to deal with a boss fight against Larfleeze and Glomulus. The mission also promises to introduce some new orange-mist infected iconic characters, like Captain Cold, Lex Luthor, and Cheetah.

Finally, there’s an eight-player raid mission that will bring players to the Violet Power Battery and an encounter with Predator. The Star Sapphires have begun to bring people back to Zamaron to encase in crystals and convert into Star Sapphires. Players will face off against amethyst-mist infused Wonder Woman (a first for hero players), and other iconic Star Sapphires like Fatality.

Additionally, Metropolis will serve as a hub for daily mission and PvP content. There will also be collection missions that reveal additional backstory and unlock new feats

The DLC will also add four new sets of gear: Hope (for heroic characters), Larfleeze (for villainous players), Manhunter (for males of either moral alignment) and Star Sapphire (for females of either alignment). This marks the first time DC Universe Online has introduced gender specific gear sets.

We got to see creative director Jens Andersen play through one of the missions. His character was wearing the Hope gear, which made him look like an armored Blue Lantern (very cool). Hal Jordan puts in a distress call, and Andersen and his party head to Mogo. They find it infested by Orange Lantern Constructs. After dispatching them, they find an avarice-infused Penguin with Hal trapped in an orange construct birdcage. They enter a boss battle, with the Penguin utilizing his hypno-umbrella and orange-construct penbots that fire lasers, ice, or acid.

After rescuing Hal and Mogo, Hall takes them Oa. The area they walk through is fairly standard space corridors, but the windows show some beautiful background landscapes, including the citadel of the Guardians of the Universe. The inside is full of avarice traps that explode and knock you back, and Orange Lantern Constructs with a variety of weapons.

They come up against avarice-infused Lex Luthor and, after defeating him, find the Power Battery with Ion. The boss fight with Larfleeze is complex, requiring the party to protect and engineer so that he can open a portal inside the battery. If the engineer is attack, he stops working. Once open, players can use the portal to enter the battery, where Glomulus is waiting. They’ll have to remove all of the orange impurity with letting Larfleeze or Glomulus get the best of them to win the day.

The combat seemed fluid, challenging and fun. The story is exciting, and the missions engrossing. War of the Light Part 2 looks like grand new cosmic adventure for DC Universe Online players.