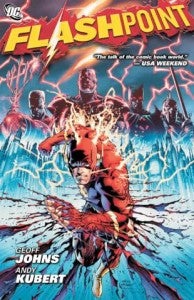 This week, DC Comics released Flashpoint, the bridging vehicle that connected the "old" DC Universe (you remember--the one where Superman wore his underwear on the outside) to the "DCnU" that has emerged in the last two months with the New 52 initiative. There's a ton of variant covers, sketches by artist Andy Kubert and more in the back of the book--but not much in the way of explanation for those images. In many cases, the backmatter here has been seen at DC's blog, The Source, and can be found (complete with commentary that's not in the hardcover) if you look hard enough. There's no introduction, either--the story is left to stand on its own, in spite of the historical significance it brings if this relaunch should "stick." Now, of course, none of this is a real indictment of the book. It's neither necessary nor common practice to have anything more than this in your collected edition and often, fans don't even get the "special features" that DC and Kubert have provided here. Still, it seems a bit bare-bones given the scope of Flashpoint and the importance it has had in shaping the new DC Universe. It wasn't long ago that I commissioned a bindery to make up copies of a Dan Jurgens/Norm Rapmund Booster Gold Omnibus. I asked them to make three copies--one for Jurgens, one for Rapmund and one for myself. When putting it together, I included dozens of interviews that I had done with Jurgens and others about Booster Gold over the course of their run on the title as well as introductions by folks close to the guys and even a couple of messages from fans and faux covers for unpublished issues of the comic. I did all of this, because the stories were special to me and I wanted to ensure that the collected edition reflect that. I even had a custom cover for the book done by Norm as a special surprise for Dan. Was that a little far to go? Yes. Was it complicated and a bit expensive? Yes. But once I had the ideas in my head, I wasn't sure which of them I could cut and still feel like I was doing service to the story and its audience. I would have expected a little of that from DC. There are, of course, a few other factors to consider. First of all, the collection was turned around very quickly, especially for DC. The Flashpoint hardcover hit stores two months after the final issue of the series shipped, whereas (for example) Booster Gold's final arc wrapped on August 10 (three weeks earlier) and a collected edition of that story--if it's coming--is still far enough away that it hasn't been announced. That isn't unusual for DC, who often takes much longer than Marvel to produce their collected editions. The turnaround time being so short for Flashpoint may well have made producing original material for the hardcover impossible, especially if it were to come from Geoff Johns, the company's COO and writer of no less than three "New 52" titles himself (Green Lantern, Justice League and Aquaman). Anything that didn't come from him would likely have sounded like little more than a press release. Another consideration is that, while Co-Publisher Dan DiDio has expressed reluctance to use the format in the past, DC is still making Absolute Editions occasionally (Brad Meltzer and Rags Morales's Identity Crisis came out a couple of weeks ago in that format). Whereas it's unusual for a traditional comics hardcover to have much in the way of bonus material, Absolute Editions are the comic book equivalent of Criterion Collection DVDs and Blu-Rays. They're as feature-rich and well-produced as anything you're likely to find in mass production, with the price tag to match. It's entirely plausible that a story so important, high-selling and well-received could get an Absolute treatment faster than any other we've seen so far, and if that's something DC has planned or at least considered it's unlikely that they would want to burn off additional material on the first printing of the hardcover, which (let's face it) will mostly appeal to the hardcore fans who would buy it even if it began and ended with the story and didn't include any of the backmatter this book does have. Ultimately there won't be many readers picking up this hardcover and thinking, "I wish there was more here." It's a dense and well-told story which reads better as a collected edition, and DC's art department did a bang-up job of using promotional images and variant covers to maximum effect. It really matters only to nuts like me, who have forty-plus Criterion movies on their shelves and a half-dozen Absolute Editions on a fortified shelf all their own. More than all of this, though, I read through Flashpoint again and, while enjoying it, found myself wondering: How the hell did Barry Allen know who Grifter was?