Last month, Marvel Studios formally confirmed that Doctor Strange will be a part of its Phase 3 movie plans with November 4th, 2016 circled on the calendar for release. It's also been heavily reported that the studio has selected Benedict Cumberbatch to play the titular role of Stephen Strange, the "Sorcerer Supreme."

With more film details becoming solidified and official every day, now is the time for opinionated comic book fans to start making their expectations and wants known for the movie. We already looked at some potential storylines that could be adapted for a Doctor Strange film earlier this year. This time around, we're listing five things (i.e. themes, ideas and characters), we'd like to see be a part of the Strange movie-verse. 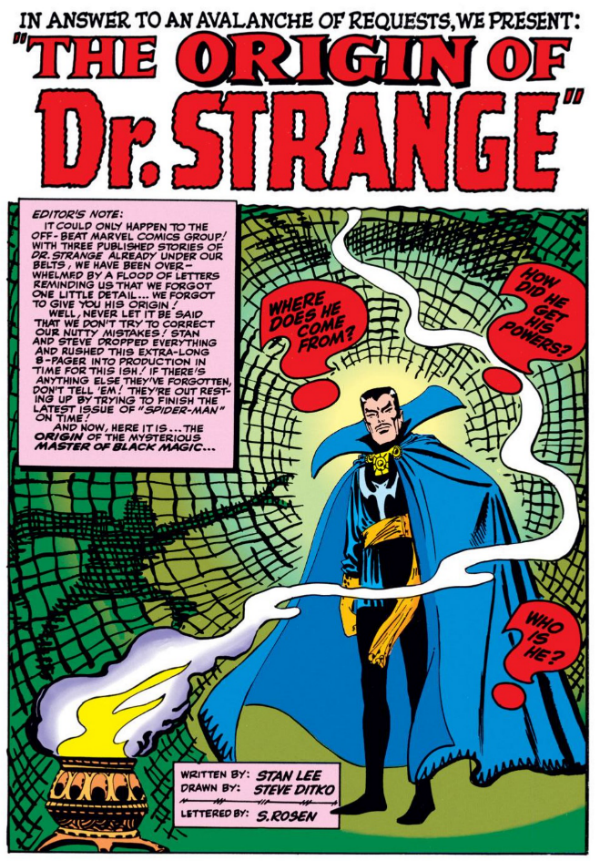 With more and more comic book movies coming out every year, there appears to be an overwhelming sentiment from fans that superhero origin stories are unnecessary and unwelcomed. And if you believe some of the reports out there, Hollywood producers don't disagree, as more studios are starting to lean against doing origin stories when introducing a new film franchise.

Putting aside how origin stories in comic book movies are a sorta necessary evil (yes, maybe Sony didn't need to redo Spider-Man's origin tale barely 10 years after its first movie was released), Doctor Strange's origin (as featured in Strange Tales #115) is a truly great storyline that ranks among the best of its kind from the Silver Age. The story of Stephen Strange, an arrogant but talented surgeon who turns to the mystical arts after a car accident destroys his hand, is an enduring tale of "pride goeth before the fall." As such, despite coming on the heels of some of the more popular Marvel heroes from the early 60s, Strange distinguishes himself from jump street as one of the company's more complex and unique characters. To ignore this element of his backstory and to just introduce him as a fully formed "Sorcerer Supreme" without context would be a missed opportunity for Marvel Studios. 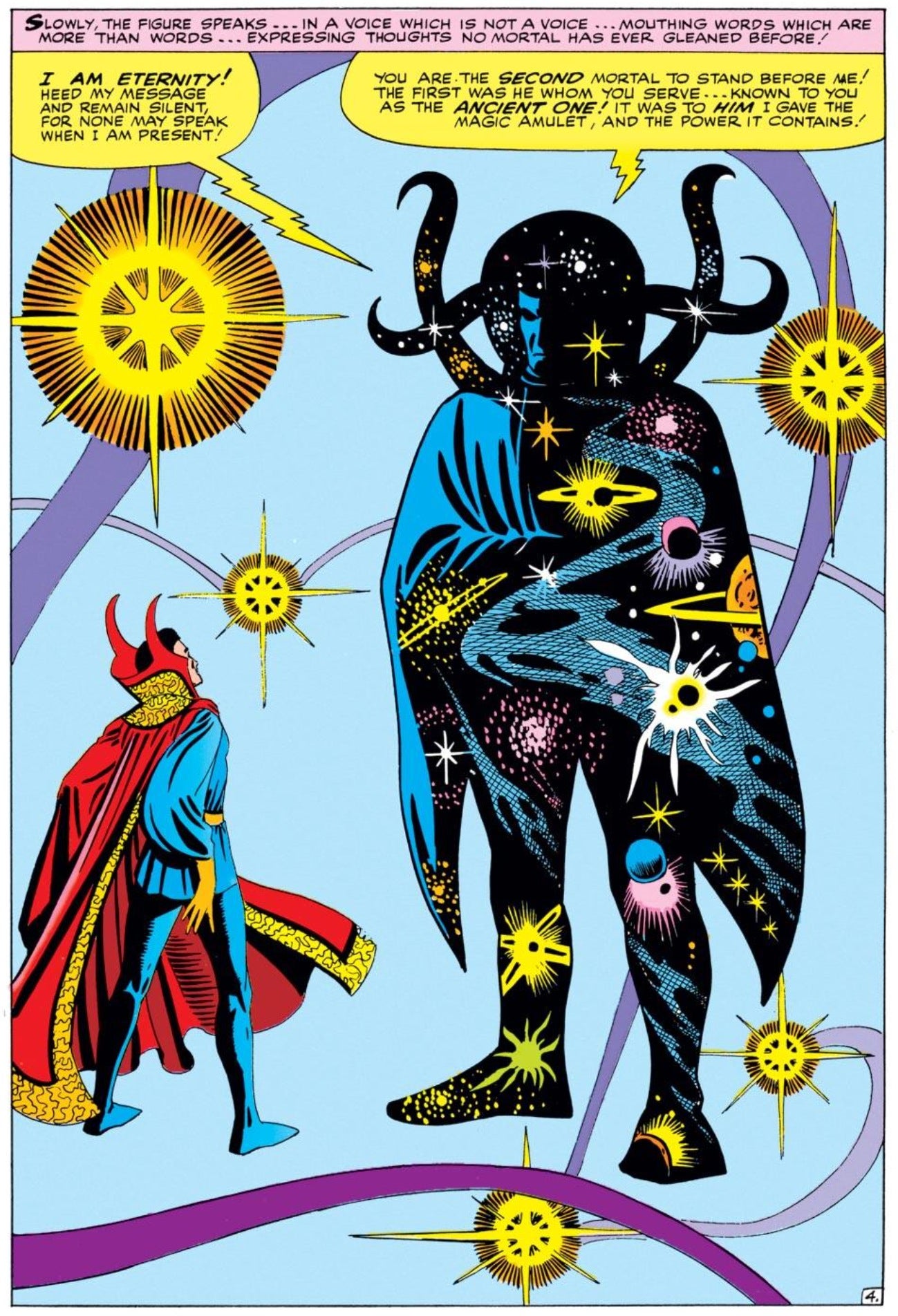 His work developing the Spider-Man universe (including its illustrious rogue's gallery) made Steve Ditko an industry legend. But the early Ditko/Stan Lee Strange Tales issues are an even better example of the artist's talent. For the most part, Lee just let Ditko run wild on these issues. And the end result of Ditko's free reign is some of the most far out, psychedelic Marvel comic books this side of Jim Steranko.

Doctor Strange director Scott Derrickson is hopefully reading up on these classic comics in order to draw inspiration for the aesthetic of his film. Because it was Ditko's big ideas and mystical landscapes that helped distinguish the world of Doctor Strange from the rest of the Marvel Universe. In the early 1960s, outside of Ditko's Strange Tales, where else could you read about a spacey concept like "Eternity" as a living entity capable of interacting with other characters? Sure, Jack Kirby did some pretty crazy stuff with the cosmos with his run on Fantastic Four, but Ditko's aesthetic popped like it was from another dimension. Imagine what a Doctor Strange movie would look like in 3-D or Imax if Derrickson could replicate Ditko? 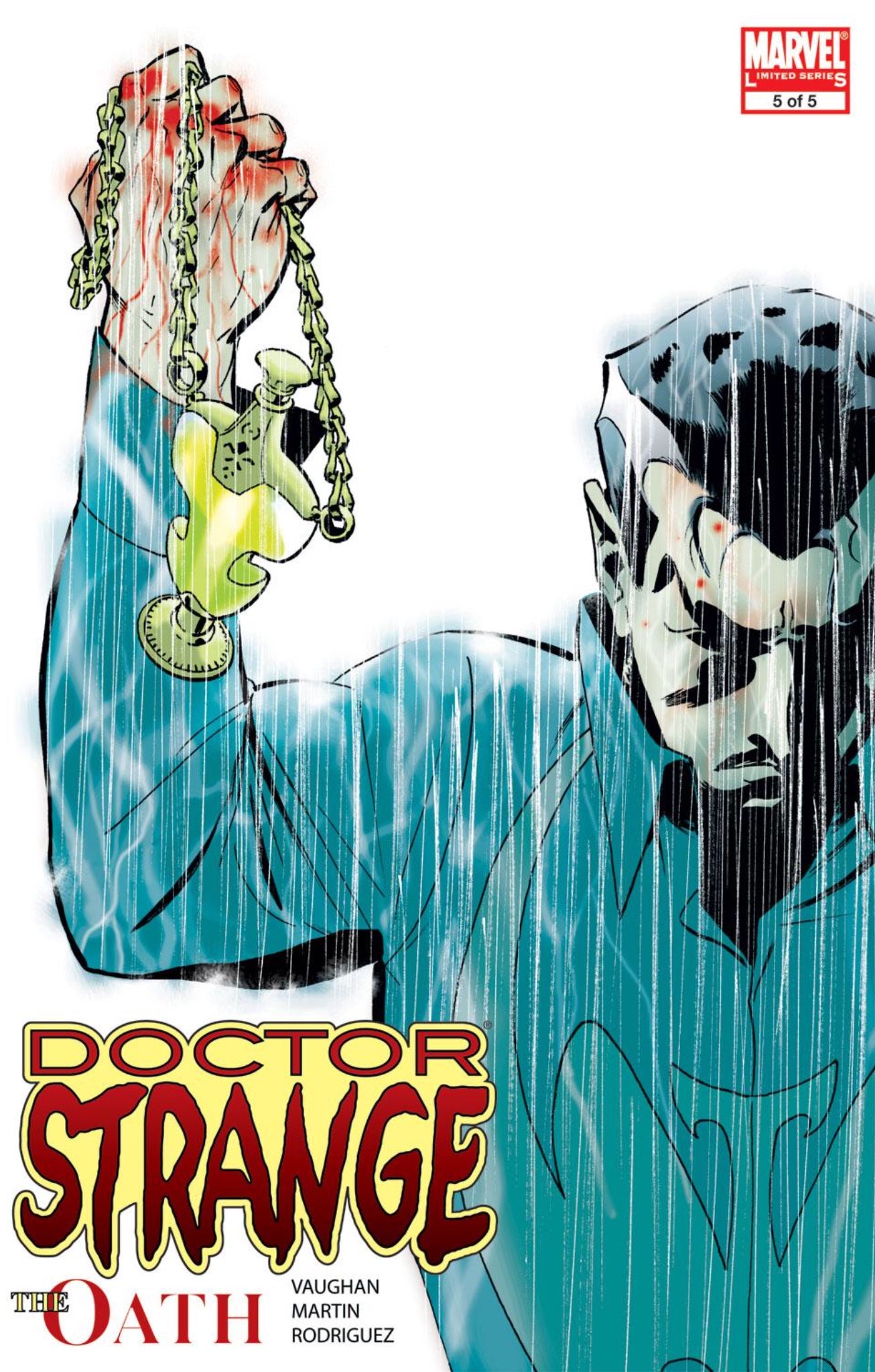 In a cinematic universe that (Thor aside) is dominated by heroes who were created and/or came to be thanks to the marvels of science and technology, it can be argued that Doctor Strange and his magical powers are an awkward fit for Marvel's Phase 3. That's taking nothing away from Strange as a hero – the guy has proven many times over that he and his powers are capable of saving the universe, cosmos et al – but in terms of the personalities of the Marvel movie-verse, just imagine what Robert Downey Jr.'s Tony Stark would probably say about the "Sorcerer Supreme" when meeting him for the first time (it would probably start with some kind of "hocus pocus" joke and devolve into a mockery of the Cloak of Levitation).

Marvel Studios needs to embrace what makes Strange so different while also demonstrating how his more mysterious, less pragmatic magical abilities can further aid and enhance its entire tapestry of heroes. In more recent Strange stories, like the excellent The Oath miniseries by Brian K. Vaughan, creators have drawn parallels between the magic vs. technology debate and the broader science vs. spirituality debate that is front and center in our national conversation. Marvel should not shy from such social issues in its Doctor Strange film as it will ultimately make the character more relateable to mainstream moviegoers if Strange is seen as someone who can get the job done relying on things that are more inexplicable than Tony's repulsor rays, or Cap's super strength. 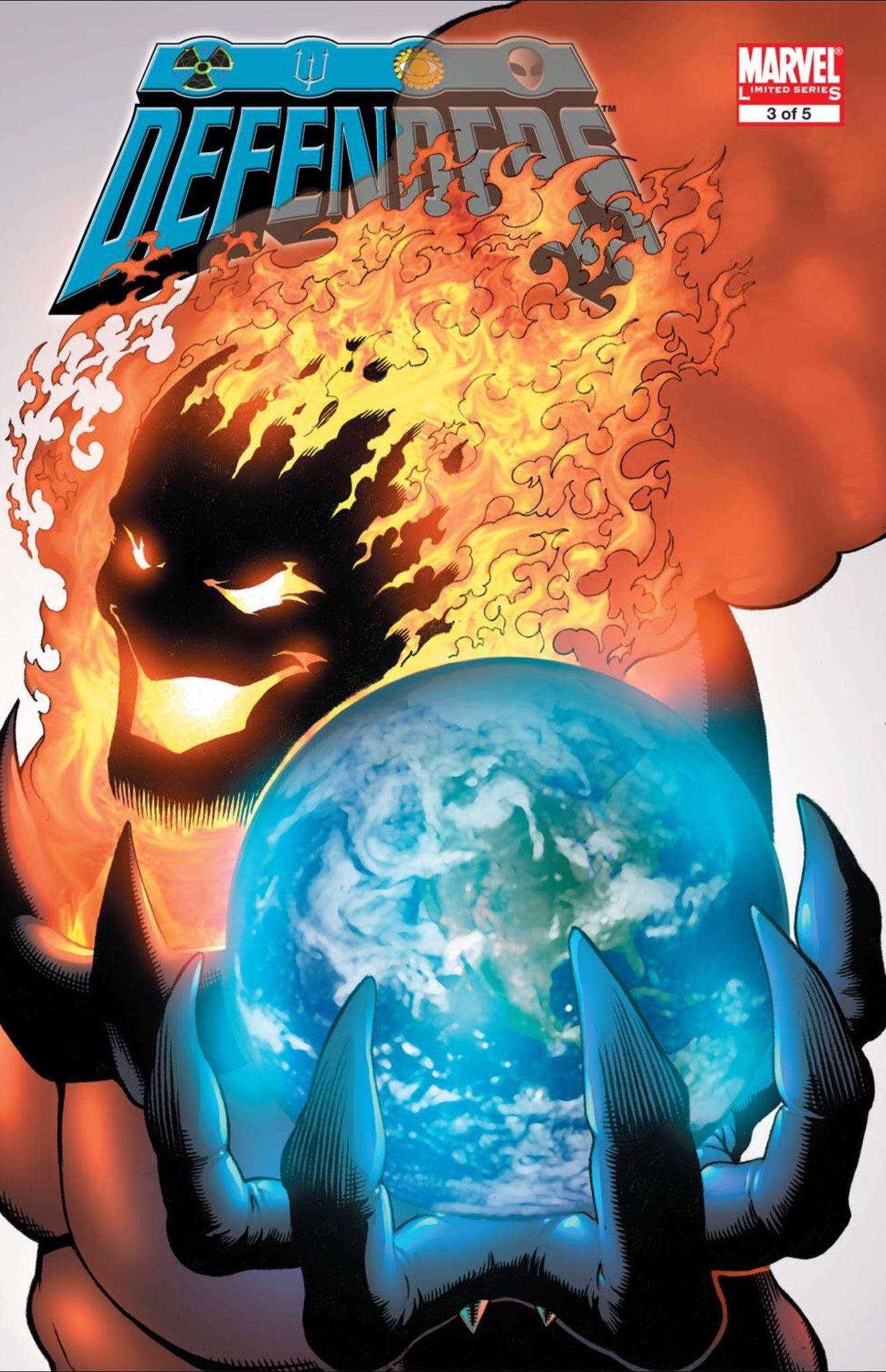 If there's one consistent knock against the Marvel Cinematic Universe is that the villains, outside of Loki, have all struggled to distinguish themselves as engaging characters that moviegoers care about. Granted, even the most iconic and popular villain will not catch on with the public if they are poorly developed or are made to look like chumps, but the Strange-verse has an assortment of totally unique rogues that could be a ton of fun on the big screen if done right.

On the flip side of that argument, one of Strange's chief adversaries, and someone who is rumored to be a part of the film in some way, is Baron Mordo – a character truly lacking a hook and intrigue when compared to the likes of Dormammu and Nightmare. Mordo is basically an inferior version of Strange, another mystic/magician who happens to align himself on the side of evil. Meanwhile, Dormammu is an ultra-powerful demonic force with a flame-engulfed head and Nightmare tortures souls from his twisted dark dimension, all while riding on the back of a possessed horse. These are the kinds of cataclysmic threats that moviegoers can buy into. And that's the first step in making a more compelling villain. 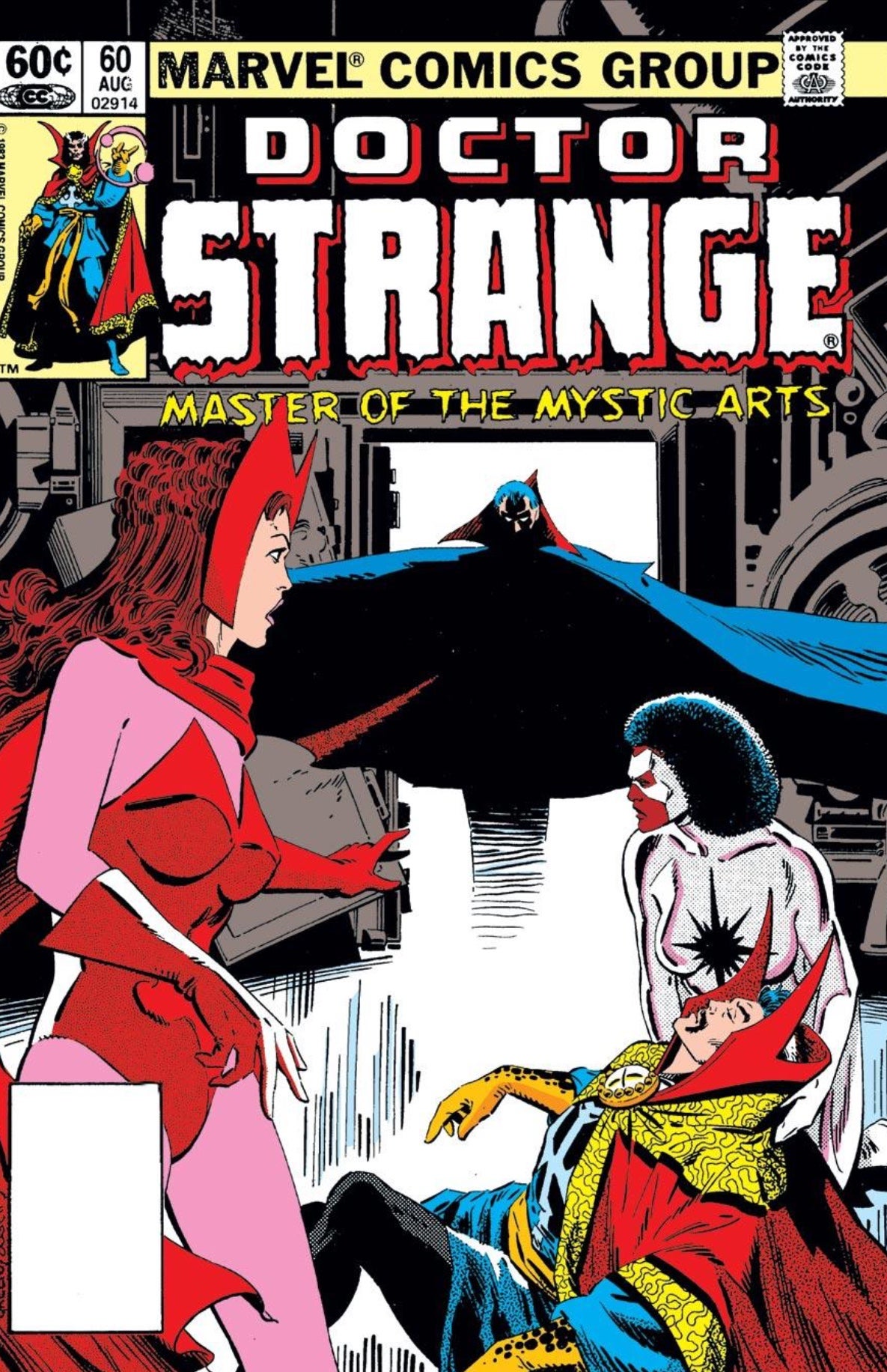 5. Broadening the World of the Occult

Piggybacking on entries No. 3 and 4, there is a ton of potential for Marvel to go in an entirely new direction tonally with its Doctor Strange film. Scott Derrickson has gained notoriety in Hollywood for his writing and direction of such horror films as Sinister and Deliver Us From Evil, and if he takes his cues from the comics – especially the Doctor Strange stories from the 1970s – a similarly dark and terrifying look and feel could be applied to the Marvel Cinematic Universe for the first time. Keep in mind that Strange's enemies are more of the paranormal and demonic nature, rather than of the standard supervillain variety. He also has numerous encounters with classic horror villains like Dracula.

If Marvel can successfully develop and evolve the occult subset of its universe, it will ultimately produce more opportunities for films, television, et al. Marvel Studio head Kevin Feige announced earlier this year that the studio had reacquired the rights to Punisher, Ghost Rider and Blade. Both Blade and Ghost Rider would seamlessly fit into Strange's cinematic world, and if either/both are introduced in 2016's film, that could potentially lead to a Netflix streaming series, or some other role in a Marvel production down the line.

Thus far, Marvel has shown every indication to expand its scope when possible ("everything's connected"), so there's no reason to believe it won't do so again in the case of Strange and his cast of occult characters/locations. All the same, if Marvel suddenly decided to play it conservatively with this film, it would be a colossal disappointment for those who believe the world of comics is bigger than just capes, cowls and supervillains.