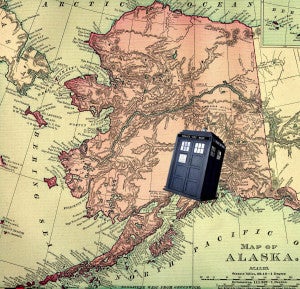 Back at the end of July, ComicBook.com wondered aloud "Whose TARDIS is this?" when we stumbled across a U.K.-style Police Call Box out in the middle of an Alaskan fishing community. It took a couple of weeks, but now we have an answer. I just received an update on the origins of the Tardis in Homer. It is not stolen from Gallifrey as early reports originally implied. It was created by the Wolfes (Bad Wolf(e)? Rose Tyler might want to watch out...). From Nina: My daughter Rosemary Wolfe and the rest of the family are huge Doctor Who fans. We run the sod farm to the west of the grove where the Tardis is located. She, mostly, built the Tardis but had to leave to return to school and so it needs a bit more touch-up, however, I am looking for the sign for the front and will apply it when I get it. We had previously built a Tardis out of cardboard and had a picture taken of it on the Time Bandit along with a macau claw. Long live Doctor Who.