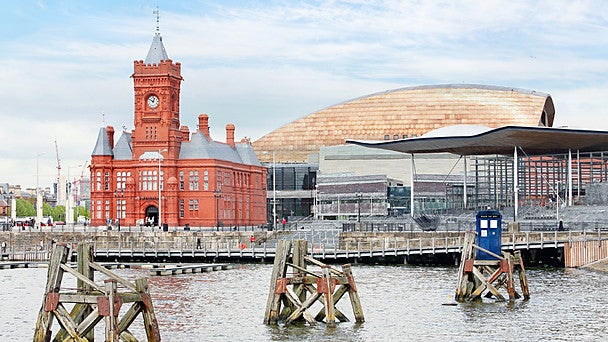 The BBC has announced that Doctor Who will be going on a first-of-its-kind world tour to introduce the new Doctor, Peter Capaldi, to the world. Capaldi made a brief debut as the new Doctor in the 50th anniversary special "The Day of the Doctor" and will take over in earnest in Season Eight.

Capaldi will be joined by companion Jenna Coleman at events beginning in London and Cardiff on August 7.

"It's fantastic that so many people across the world love Doctor Who," said Capaldi. "After 8 months solid filming deep in the world of monsters, Jenna and I are thrilled to be heading for the Planet of Fans."

"I've always thought we'd all be a lot safer if the Doctor conquered the world, instead of the Daleks," said showrunner Steven Moffat. "Now with Jenna and Peter leading the charge, it looks like it's going to happen. I'll be bringing up the rear to handle the exposition scenes, and maybe carry some bags."

"Where better to start the World Tour than the Doctor's home for the last decade?" said Rhodri Talfan Davies, Director BBC Cymru Wakes. "The sight of the TARDIS and marauding aliens is now a familiar part of Welsh life - though they still scare the life out of the traffic wardens. There is a real sense of excitement and anticipation about the new series – and I know Peter and Jenna are going to be a breath-taking new team. Roll on August!"

Filming on Season Eight of Doctor Who is currently ongoing. The 12-episode season is expected to premiere this fall.