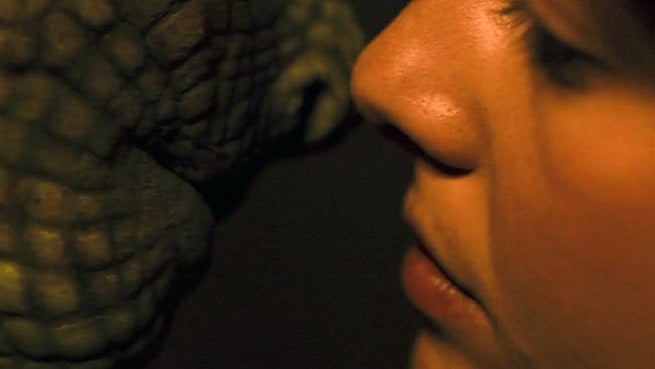 A moment from Doctor Who's Series 8 premiere that had many fans cheering seems to have ruffled a few feathers as well (via Buzzfeed).

Those who watched the series premiere, "Deep Breath," will recall a scene in which The Doctor's allies were holding their breath for a prolonged period of time in order to escape detection by some angry, killer robots. Jenny Flint (Catrin Stewart) couldn't continue holding her breath any longer, so her reptilian, alien wife, Madam Vastra (Neve McIntosh) shared some of her own breath by instigating the lesbian couple's first on-screen kiss.

As reported by The Guardian, despite only lasting mere seconds, the kiss bothered at least six viewers enough to report it to Ofcom, the British broadcast regulator, though Ofcom chose not to investigate.

However, the kiss was edited out of the episode when it aired in Asian countries, including Singapore, Hong Kong, Thailand, and South Korea, as reported by The South China Morning Post.

In a statement given to BuzzFeed, BBC Worldwide said, "in order to comply with broadcast regulations in Asia where our BBC Entertainment channel airs, BBC Worldwide made a brief edit to the first episode of Doctor Who Series 8, but did so without detracting from the storyline."

BBC Worldwide was making sure it stayed within certain, strict broadcasting guidelines in Asian countries, including rules that allow for censorship of any content that may threaten the sanctity of marriage, and another that restricts storylines involving homosexual relationship only to programs aimed at adults 18 years of age or older (though Pink News notes that Vastra and Jenny's relationship has never been censors or altered previously).

The premiere aired unaltered in the US (well, unaltered besides the addition of about 30 minutes of commercials). Episodes continue to air Saturday nights on BBC America.

Doctor Who's Lesbian Kiss Gets Censored In Asia