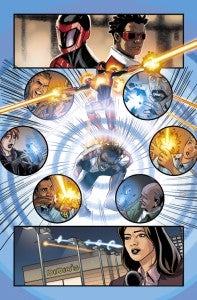 Readers of Fabian Nicieza and Pete Woods's new monthly Legion Lost, wherein a number of Legion of Super-Heroes members travel back from the future and end up stranded here in the 21st Century, with the events of Flashpoint making it impossible for them to return home. The final pages of the first issue appear to show the deaths of Gates and Yera, a couple of fan-favorite characters. In this week's lead-up interview to Wednesday's Legion Lost #3, though (which ran at DC's blog The Source), writer Nicieza shared with readers "three things you need to know if you're ever lost in time," and one stuck out to fans like a sore thumb. Item #3 on his list was "If two of your teammates die in your first issue and one is a shapeshifter and one is a teleporter, relax, they're probably not really dead. By way of elaborating, he added, "One of them might be back already and you just don't realize it yet…". Sounds to be as though Yera (the shapeshifter) may be hidden (or stuck) as one of the villagers we saw in the second issue, or one of the "hyper-sapien" monsters shown in the four pages of Pete Woods preview art included in the blog post. Nicieza, who spoke with me about Legion Lost back in September, did joke with the readers of the blog, asking those who believed the deaths would stick "How long have you been reading comics?" Funny? Sure. The only real question is whether falling back into the comfortable tropes of the genre is really the best way to go when writing for a relaunch that set out to (and appears to have succeeded in) lure in new readers who come to comics with a decidedly different perspective and set of expectations than the long-time readers who are comfortable with instantaneous resurrections. Either way, Legion Lost #3 hits the stands on Wednesday.