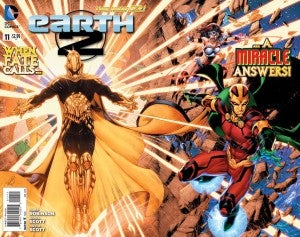 With Earth 2 entering its second year soon, DC has clearly decided to pull out some of the big guns on the series. The gatefold cover to April's #11 has been revealed and, as promised, this one's quite a shocker. It also suggests ties to Wonder Woman, Justice League of America's Vibe, Trinity War and other big stories going on in DC's principal Earth. That's right, folks, Mister Miracle--one of the most popular and frequently-seen of Jack Kirby's New Gods, and a character who's been missing in action since Final Crisis, appears in Earth 2 next month. Taking this together with the use of Orion in Wonder Woman, it seems likely that by the time Darkseid comes back to find his daughter, seen locked up in Vibe, we'll have a New Gods response team ready. Before the launch of the New 52, Larfleeze writers Keith Giffen and J.M. DeMatteis teamed with their old Justice League artist Kevin Maguire to pitch a New Gods series for the relaunch, but it never got off the ground.