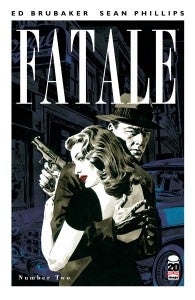 Ed Brubaker, whose work on Captain America for Marvel has made him one of the best-known names in commercial comics at the same time that titles like Criminal and Fatale have cemented his creator-owned street cred, will appear as a special guest of the Image Expo in Oakland later this month. According to a press release from Image Comics, the Expo--which will also feature appearances by all of the Image founders except for Jim Lee as well as Joe Casey, Brian K. Vaughan and others--will see a special one-day appearance by Brubaker on February 25. According to Image, "Brubaker will be part of a panel on writing comics on Saturday at 12 p.m., where he and fellow writers Steve Seagle, Joe Casey, Jonathan Hickman, John Layman, Nick Spencer, and Brian K. Vaughan will discuss the art of crafting scripts and stories." Image also announced today that Fatale #2, written by Brubaker with art by Sean Phillips and Dave Stewart, had sold out at Diamond Comics Distributors before the issue hits the stands tomorrow. The publisher is sending Fatale #2 back for a second printing, as well as a third printing of the sold-out Fatale #1.