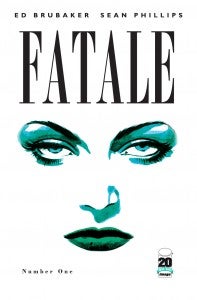 Image Comics announced today that the first issue of Fatale--the supernatural noir comic book by Captain America writer Ed Brubaker and his Criminal collaborator, artist Sean Phillips, will go back to press yet again for a fifth printing, which will be released to comic book retailers on May 9. "I couldn't believe it when Eric told me the fourth printing had sold out immediately, because we set that print run thinking it would last for several months," said Brubaker in a statement released by Image. "But it appears many retailers still just can't keep the first issue in stock. So we are back to press one more time, because I want to be sure retailers can sell the other issues in the series." Soon, Brubaker may not have to worry about it; Image's turnaround time for collected editions is typically faster than DC or Marvel manage, so it's not unreasonable to assume that in the next few months, Fatale's first trade paperback collection might hit the shelves. While the price point would be a bit higher, it would guarantee that retailers and fans would be able to catch up on the series without having to go digital and lose the print-only backmatter. Several comics have gone into high printings in the last six months, with DC releasing five or more printings of Animal Man #1 and Justice League #1 as well as Image's Fatale. The fourth issue of Fatale, which just hit the shelves last week, is the first issue of the series not to sell out at the distributor level before it hit the shelves. Whether that means retailers have adjusted their ordering accordingly or just that it will sell out later remains to be seen.