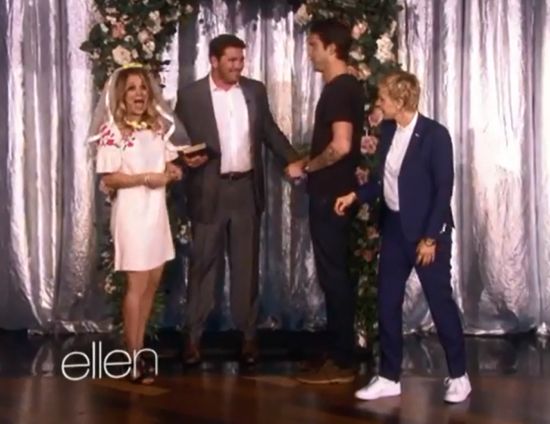 Earlier today, Kaley Cuoco and Ryan Sweeting possibly got married on The Ellen DeGeneres show. During the show, Ellen claimed that her head writer Kevin had become ordained over the summer and had even previously married a couple. Then, Kevin conducted a short ceremony, which both Kaley and Ryan willingly participated in. After both Kaley and Ryan agreed to marry, Kevin said, "By the power invested in me by California and a Google search, you guys are married." Before the ceremony, Ryan had asked, "This isn't legal, right?" And Ellen insisted, "No, it's legal." Of course, most online are assuming the wedding was fake, but there have been some questioning if it could have been legally binding. In the state of California, people can become legally ordained in only minutes online, so Kevin very well could be a legally ordained minister as Ellen claimed. In fact, Ellen even reiterated on Twitter that the marriage was legally binding. Ellen tweeted, "Congratulations, @KaleyCuoco and @RyanSweeets. Your wedding was beautiful. And also, legally binding." So is Kaley Cuoco now legally married? It depends. Even though Kevin might have been legally authorized to perform the ceremony, a couple in California is required to obtain a marriage license in order to have a legally binding wedding ceremony. If Kaley and Ryan didn't have a marriage license, then the wedding was a sham.