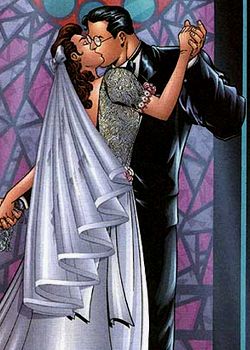 Valentine's Day. The day when we all stop, turn to our beloved and whisper sweet nothings over a candlelit dinner while enjoying wine and chocolates. The stuffed bears may make an appearance later in the evening. Comic book heroes and villains rarely get such opportunities to pause and swoon, which makes their relationships and its ups and downs that much more meaningful. Listed below, in celebration of this Hallmark holiday, are some of the greatest, longest-lasting comic book relationships ever.

1. Clark Kent (Superman) and Lois Lane - When these two crazy, 70-year old kids finally tied the knot in 1996, it was the "I Do" heard round the world. Everyone knows these two characters, but comic fans had followed the struggle of once shy and awkward Clark Kent to get Lois to notice him for years. Through kidnappings, Lois' initial love of only Superman, Lana Lang, explosions, Doomsday, and the recent events of both Identity and Final Crisis, Lois and Clark have weathered the storm to stand forth as not just the signature couple of the DC Comics Universe, but perhaps even for comics as a whole. Their story is timeless and knows the bounds of no universe.

It wasn't just good ol' Tiger who hit the jackpot when Mary Jane Watson stepped into his life in Amazing Spider-Man #42. Fans of Spidey had another reason to root for their often disrespected hero; a hot redhead! As their relationship ebbed and flowed, leading up to their wedding in Amazing Spider-Man Annual #21, interest in the couple increased. Their marriage would bend and break over the years, with death, miscarriage, Civil War and a host of other trials, but they always came back to each other. With the erasing of their marriage in One More Day, a hole in the Marvel universe was left. With build-up that started in Brand New Day perhaps we'll see this star couple emerge once again.

There should have been a storyline at some point titled "The Many Deaths of Steve Trevor." Like many love interests of superheroes, Steve Trevor has been in distress several times. He was the first reversal of the super-man / human female love interest dynamic, and for decades he and Wonder Woman survived it all. It takes a strong man and a deep love to outlast gods, goddesses and a world war, and in issue 329 of Wonder Woman vol.1, they wed. Even though a post-Crisis version of Steve Trevor ended up marrying Etta Candy, another survivor of the 1940's and her addiction to sweets, the relationship still stands as one of the longest and most status quo changing in comics.

Easily the 'first couple' of the Silver Age, Reed and Sue remain one of the quirkiest and most realistic couples, super-powered or not, in the Marvel universe. Add two kids to the mix, each with their own gifts, and their 40-plus year marriage is all the more remarkable. The problems this couple faces would test anyone's limits. How many couples do you know who can go from arguing over who's picking up the kids to fighting the Frightful Four two hours later? As the times have changed, so has the relationship, with Sue going from shy Invisible Girl to powerful and headstrong Invisible Woman, all the while with Reed by her side.

What makes the love between these X-Men so powerful is that they went from sweet and innocent Marvel Girl and Cyclops, sick with puppy love, to the complicated adults we know them to be today. After finally getting serious, Cyclops had to witness her destruction as the Dark Phoenix, an event that shook the X-Universe. She would later appear and have to battle, literally, several demons to regain her beloved Scott. Their eventual marriage in X-Men #30, vol.2, was made all the more sweet by the trauma and tragedy the couple had endured over the years. With her death once again, the great Jean/Scott story is over, for now at least. Her eventual resurrection just proves how deep and lasting, and vital, this love is.

6. Ben and May Parker

- While their actual relationship, in the continuity and chronology of the current Marvel universe, may have been tragically brief, the love and influence this couple has held over their nephew Peter has been everlasting. Ben's only appearance came in Amazing Fantasy #15, where he is shot and killed, inspiring Spider-Man's pledge to be more responsible with his given power. Aunt May often cites Ben as her source of strength, and many flashbacks over the years have proven their love to be one of the most wholesome and pure of any relationship, despite the universe it inhabits. With their age, wisdom and lack of superpowers, May and Ben prove that true love and basic humanity never fades.

How could the monarch of a powerful African nation and a woman perceived as a goddess not make this list? After a quick romance in the pages of Black Panther, vol. 4, T'Challa and Ororo wed and quickly find themselves siding with Captain America during the Civil War. Their relationship has been shown to be full of good humor, mutual respect and a sense of pride in the running of their country. After filling in for the Richards in Fantastic Four, it was back to Wakanda. It is unknown at this time what will happen with the new Black Panther, but one thing is for certain, this is the new power couple of the Marvel universe.

Centuries passed before these two ever had the chance to connect in the pages of Bill Willingham's Fables. From the first few issues on, the Big Bad Wolf was determined to make Snow his. After some really strong magic, Snow and Bigby welcomed a family. It took a few more years, but Snow and her wolf finally married in issue 50 of the series. Since then, the driven, hard-edged former deputy mayor of Fabletown has settled into her role of wife and mother, and Bigby has had the chance to show his loyalty to the woman he loves while keeping his senses keen. Their union represents that in the realm of fiction, anything truly is possible.

If love could ever be defined in a few panels, then the last pages of Identity Crisis #7 would be in any dictionary. One of the lights of the Justice League, Ralph and Sue were young and in love, with Sue willing to follow Ralph anywhere, despite the danger. Her death in the pages of the DC limited series Identity Crisis would serve to highlight just how vital and needed her marriage to Ralph was. For over 40 years they served as a wholesome reminder of what love in the superhero world could be, and Ralph's one-sided conversation with his departed wife in those last few panels heartbreakingly remind us of that.

Iris Allen has perhaps one of the purest, biggest hearts in the DC Comics Universe, especially where her family is concerned. After marrying her unpunctual boyfriend Barry, she became the target of Professor Zoom, dying. Her death would be short-lived, and she would go on to be Barry's greatest partner. She was instrumental in helping to prevent disruptions in the Flash line, and most recently, when the Anti-Life Equation took hold in Final Crisis, it was a pure kiss of her beloved Barry that brought her to tears and out of enslavement. Although one is human and the other a speedster, their relationship has never felt rushed, old or dated.

Star Wars x Columbia The Clone Wars Jackets Drop Tonight: Here's How to Get Them