Everything you need to know about The Belko Experiment

The comic was written by ComicBook.com's Russ Burlingame and features art by Gerard Conte with coloring and lettering by Manny Mederos.

The comic, an 8-page story titled "Into the Chaos," centers on Keith, the character played by Max Steel and Silicon Valley star Josh Brener.

While the movie blends horror and suspense elements with an undercurrent of black comedy, "Into the Chaos" focuses primarily on the suspense aspect, trying to imagine what it would be like to be inside the mind of a character who arrived at work one morning and then inexplicably found themselves locked inside of a bloody spectacle with no idea who the next victim might be.

You can read The Belko Experiment: Into the Chaos in the attached image gallery 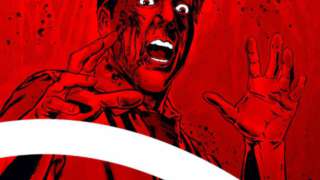 The Belko Experiment - Inside The Chaos Gallery

The film centers on 80 American employees in an office building in Bogota, Colombia, who are locked inside their office and forced to battle one another to the death by a mysterious voice coming from the building's public address system.

It's an ensemble movie, and while there's one character who emerges quickly as the "main" main character -- Mike Milch, played by John Gallagher, Jr. -- there are a handful of others who play big roles and most of them are, at least at first, not bad guys.

Keith is one such character, and one of the more memorable and likable of the supporting cast, with a memorable "boiling point" in the movie, around which one of the scenes in the comic is centered.

The Belko Experiment comes out March 17, with preview screenings beginning at 7 p.m. tonight.