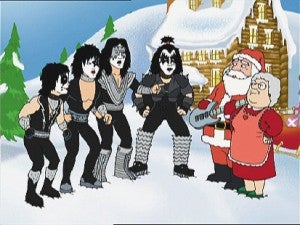 Legendary rock band KISS have joined forces with FOX ratings juggernaut Family Guy to create a licensing agreement that will allow Seth MacFarlane's quirky family comedy to release toys and other merchandise relating to KISS. "KISS and Family Guy coming together for a line of products is a great mash-up of two iconic brands that speaks directly to fans who will be able to enjoy something a little different and special with what we have in store," said Jeffrey Godsick, president of Fox Consumer Products. The show featured an episode where it was revealed that while Peter (the braindead husband at the center of the show) was a rabid KISS fan and had been for life, his wife Lois had only been pretending to be in order to appease him--until she discovered that frontman Gene Simmons was actually a lover of hers from years before. According to The Hollywood Reporter, KISS won't be alone in this; the Family Guy producers hope to market merchandise based around a number of the show's guests. Who here wants to see the Rush Limbaugh action figure? I know I do. KISS have traditionally not shied away from marketing. A new KISS #1, out this week from IDW, is far from the first foray into comics for the band, who have also been published by Marvel and Archie. According to THR, KISS has made over $1 billion on merchandising alone over the years. In terms of their relationship with Family Guy, bandmember Paul Stanley said, "We are focusing more and more on the upper-tier, blue-chip opportunities for prestige partnerships. Family Guy's track record and consistent success with its demographic makes this match-up ideal."

Kung Fu: Nicky Wrestles With Her Actions in "The Architect" Exclusive Clip