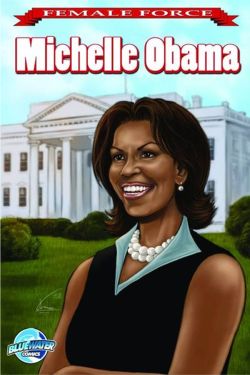 Move over President Barack Obama! First Lady Michelle Obama has become the latest political figure to make the transition to comic books. Indy comic publisher Bluewater Productions will publish a 4-issue mini-series called Female Force that will feature prominent women who are highly influential in today's government. The first pair of issues, due out later this month, will feature former First Lady Hillary Clinton and Alaska Governor Sarah Palin. Bluewater will set the issues to focus on the two politicians' historic runs for office in the 2008 Presidential election.

Current First Lady Michelle Obama will be the focus of the series' third issue. That issue will hit newsstands in April. Representatives for the Washington State based company plan on a run of 10,000 copies for each issue. However, based of the enormous popularity of the Amazing Spider-Man/Obama issue, now in its fifth printing, the company is geared to release a second printing of the Michelle Obama issue if needed.

Cover prices for each 22-page issue are set at $3.99, with the current First Lady's issue expected to fetch a much higher price on Internet sites like Ebay. Florida free-lance artist Vinnie Tartamella will illustrate the cover of the Hillary Clinton, Michelle Obama, and Caroline Kennedy issues of Female Force. Caroline Kennedy will be featured in the series' last issue.