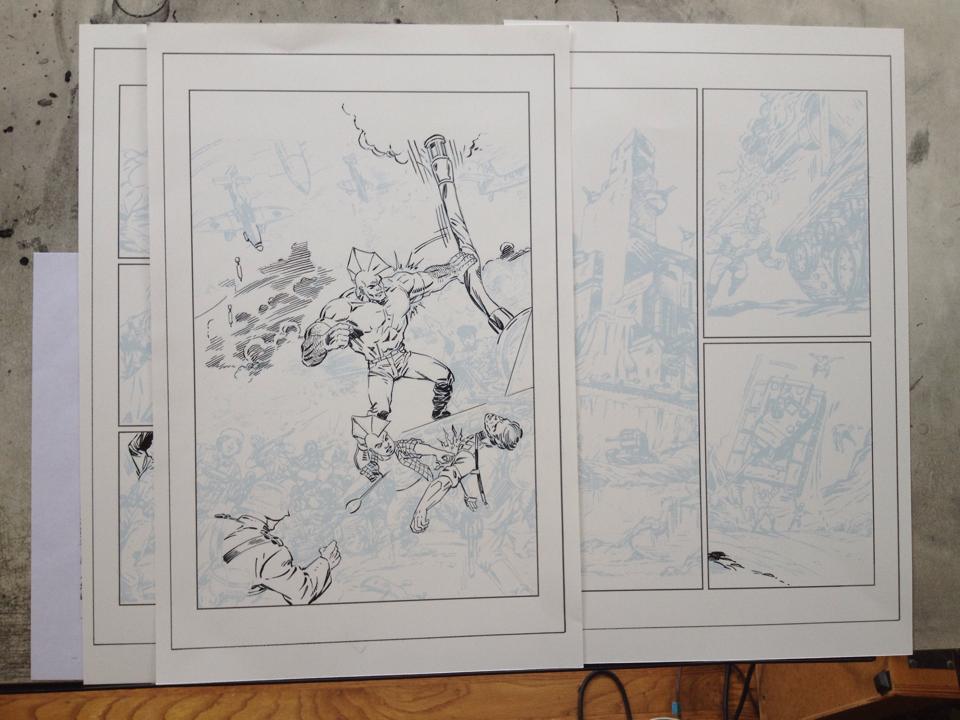 Trimpe has penciled a backup story, which series creator Erik Larsen will ink; Larsen also drew a story for Trimpe to ink.

The Trimpe-drawn story, seen above, features Dragon and his son Malcolm battling Nazis (we assume time-travel is involved). The story is set in the past, when Malcolm was significantly smaller; he's now the series lead and identifiably not a kid sidekick.

Which is, after all, where the idea came from here; Savage Dragon #200 features a variant cover drawn by Jack Kirby, which sees Dragon and Malcolm battling Nazis. The image originally featured Captain America and Bucky, but when the Kirby Museum asked Larsen to ink it for use as a print sold at conventions, Larsen adjusted the image to be his creator-owned characters since, legally, the Kirby Museum had no standing to sell merchandise featuring Marvel-owned characters.

"This was a drawing I did over Jack Kirby's pencils for the Jack Kirby Museum," Larsen posted to Facebook at the time. "It was originally Captain America and Bucky but I couldn't use them. My thought was to try and create what would have been the ultimate Kirby pinup of Savage Dragon."

The issue will feature a number of backups, including one by Batman Incorporated artist Chris Burnham, as well as the regular funnies strips that run in the back of every issue of the comic. The main story will see Dragon in action for the first time since Malcolm formally took over as the series lead earlier this year, as a group of villains go after him in prison since the de-powered Dragon is now easier to kill than his son. The Image Comics website reports that the issue is due in stores on November 12.