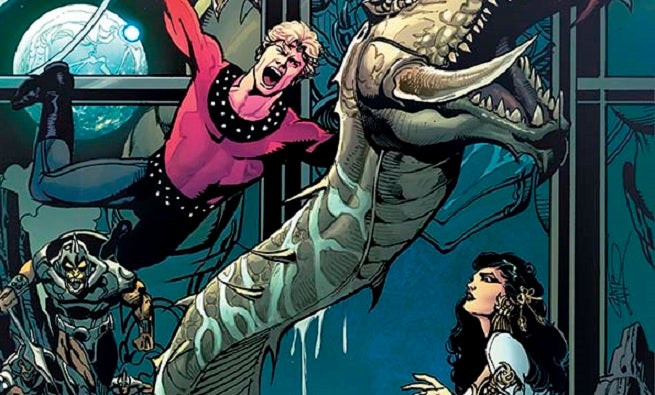 In recognition of the end of this current arc of Flash Gordon and the departure of the creative team of Jeff Parker (writer), Evan “Doc” Shaner (artist), and Jordie Bellaire (colorist), I figured I’d take a look at the current issue and the run as a whole resurrecting a gimmick from a past review. I give you, limericks! Warning, there may be SPOILERS!

Though the team of Parker, Shaner, Bellaire is a gas,

All things in this world must unfortunately pass.

So, grab a tissue,

As we dig into this issue,

In which the Flash-y awesomeness reaches critical mass.

Last book the Z-Plane had earth in its sights,

With home just in view,

For our hero in black, white, and red tights.

Welcomed home by a quite grateful planet,

It seems their achievements weren’t taken for granted.

Was greeted with screams,

Of adulation rather than stoic faces of granite.

“He Saved Every One of Us!” posters proclaim,

It’s a reference of course,

And for its original source,

One need only listen to Queen sing of our hero’s fame.

Though Gordon, Arden, and Zarkov should be quite pleased,

As a lives of worth and respect they have seized,

That they aren’t dismissing,

And the galaxy by Ming’s rule is still quite diseased.

So, rather than be head of aerospace,

Quite a step up after life in disgrace,

In an act of defiance,

And our trio blasts off once more into space.

They find a very unpleasant disturbance,

But Ming turns out to be a decoy organic,

And his soldiers run off in a panic,

But huzzah and hooray!

As you might be able to tell from above,

There certainly is much here to love,

Through all of the lines,

Heaven-sent on the wings of a dove.

As in past issues, we get lots of heart,

That helps to set this series and its heroes apart,

From other current books,

With protags who are schnooks,

That act like a fun, lighter tone means they’re not smart.

The run was a breath of fresh air,

That for the first time made me really care,

About a pulp hero from the 30s,

And there’s nothing with his friends he wouldn’t dare.

Parker should really be commended,

For writing a run so thoroughly splendid,

The action was great,

With jokes, winks, nods, and references that never offended.

Turning to the art, it was always impressive,

And characters were always expressive,

With visuals second to none,

Only drawing me in more with each issue successive.

Doc Shaner is certainly a star on the rise,

And his style I for one always prize,

But much of what’s new,

Could stand to learn from his artistic highs.

Creating a universe both throwback and forward-thinking,

And from a challenge never cowardly shrinking,

Meeting each issue unfazed and unblinking.

Not to mention Jordie Bellaire would be tragic,

For each issue she imbued with her magic,

So you really knew,

That she had a firm grasp of this coloring shtick.

It’s no exaggeration for me to say,

Show me what impact,

A colorist can enact,

And over how much of a book’s look and tone they hold sway.

This creative team, it must surely be said,

May have a very bright future ahead,

If they work together again,

I’ll say it quite plain,

There would be few things I’d rather be reading instead.

With that said, may I briefly spotlight,

A character in red and yellow tights,

They’ll be working on soon,

In a further creative boon,

Captain Marvel is the character in question,

I can’t wait to see,

Just what these three,

Can do with this DC Comics possession.

Getting back to Flash Gordon for one second more,

Reading any book of its run was certainly no chore,

So do yourself a favor,

And in your resolve never waver,

Buy a trade or the issues for reading pleasure galore.

Flash Gordon #8 Review: All Good Things Must Come to an End

Superman & Lois: "The Perks of Not Being a Wallflower" Photos Released

My Hero Academia Needs to Explore Izuku's Family Next

WandaVision Cinematographer Reveals How Agatha All Along Montage Was Filmed

Zack Snyder's Army of the Dead Gets Official Rating