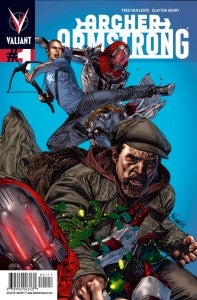 With the "Summer of Valiant" drawing to a close in August with the first issue of the relaunched Archer & Armstrong, Fred Van Lente is facing a challenge that's unique even among the Valiant writers and artists who have been tasked with resurrecting some beloved properties from years ago. In his case, the writer of Archer & Armstrong is not only reviving a beloved property, but trying to reinvent the wheel on the most critically-acclaimed and fondly-remembered of the original Valiant crop of titles. With artist Clayton Henry at his side, he'll navigate politics, religion and superheroics, all while being compared to Barry Windsor-Smith. Van Lente joined ComicBook.com to talk about the series, the 99% and courage in comics. It's interesting—while Archer and Armstrong was never the sales sensation of some of the other Valiant books in the '90s, it also never really degraded in quality at all and is one of the most-loved new comic series of the last 30 years. Is it weird taking over a book like that, where a lot of fans are saying, "I hope he doesn't f--- this up" as much as they're excited to see it? I don't know it's weird so much as a challenge I relish. Really, it's no different than taking over Spider-Man or any other franchise property. You want to retain what made people love it in the first place but also update it and to a certain extent bring in new readers and broaden the fanbase. Warren and Clayton and I have spent a lot of time concentrating all those things and I'm pretty thrilled with what we've come up with. Armstrong is still a hedonistic immortal, Archer still a repressed martial arts master; together they still travel the globe getting into strange and stranger adventures while being pursued by the sinister Sect, a sort of United Nations of all the world's secret societies. We've tried to focus the "high concept" to focus on the idea of the duo being conspiracy busters -- so expect the Freemasons, the Vatican, Nazis and aliens to feature prominently -- and added and tweaked a few more elements I'm loathe to give away here, but there's plenty long-timers will enjoy recognizing, but not to the point where newcomers will feel alienated.

The One Percent is just one of those concepts that's begging to get you skewered on Fox News AND by Frank Miller. Going into it, did you hesitate at all taking something on that's so rooted in the topicality of the moment? No. The more corporate and mainstream comics get, the more timid and non-controversial their content seems to become. I prefer comics that push the envelope of what's acceptable, to really relish in our status as an off-the-grid medium. Also: It's the Internet Age. If no one is denouncing you on-line, it's because no one is paying any attention to you. Screw 'em if they can't take a joke. That said, how did you approach making those characters somewhat more timeless, so that if someone finds this on ComiXology or in a trade collection in ten years, it's still accessible? It's hard to guess the degree to which future readers will remember the year of Occupy. You say that like the concept is dependent on Occupy Wall Street. I think it's bled into the regular culture and is here to stay. You don't need to get any reference to any current event to get the idea that are financial markets are being run by a devil-worshipping cabal of elite weirdoes. Why it practically writes itself!! [laughs] That said, I don't think there's anything particularly wrong with a comics series evoking a particular time or place. Do people complain Watchmen is "too '80s?" 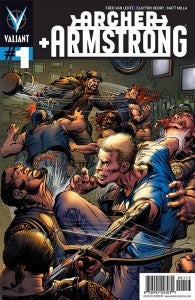 Do the bull's head and bear's head guys in the One Percent have like a Sharks and Jets thing going on? Does that indicate some kind of philosophical split? Or just a cooler design to have both represented? It's Yin-Yang, baby, God/Lucifer. Confidence versus pessimism. Bulls represent one, bears the other. You've got to have both for a complete system. Or it could just be a sex thing. You're a fan-favorite writer who's been really intimately associated with basically one publisher for quite some time now. What made this the right time to jump to Valiant? Well, they asked, for one thing, which is always nice. [Laughs] I still do stuff for Marvel and other companies but what's very fun and very cool about Valiant is being on board for building a full universe from the ground floor. And I've got a huge amount of respect for Duane, Robert, and Joshua, all the creative folks involved, and Warren Simons and I very much on the same wavelength. It's been a huge joy. The "Summer of Valiant" has so far been a rousing success, and Archer & Armstrong #1 will be the initiative's closing act. That's got to feel like a vote of confidence, right? It's very flattering and inspiring us to do our absolute best work. It's very cool and ballsy of Valiant to do such an unusual series as part of their initial launch and I hope the readers reward us with robust sales!

Fred Van Lente on Archer & Armstrong, The 1% and the Summer of Valiant