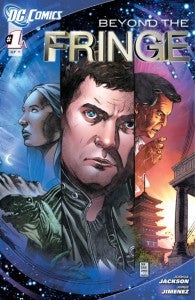 DC Entertainment has announced a new digital comic series based on the Fringe TV show. The series is called 'Beyond the Fringe' and is written by series star Josh Jackson with cover art by Drew Johnson. 'Beyond the Fringe' will be the third comic series based on the Fringe TV show. The fourth season of Fringe starts on Friday, September 23 at 9 PM EST on Fox. "We received a great response from fans to previous 'Fringe' comics, and I'm especially excited to see their reaction to 'Beyond the Fringe' as we further integrate the story into the mythos of the show. And of course, we're thrilled to be working with Josh Jackson in his debut as a comic book writer," said Hank Kanalz, senior vice president of digital for DC Entertainment. The 'Beyond the Fringe' series will consist of fourteen chapters that alternate between storylines tied directly to the show and what-if storylines. Josh Jackson will be writing an arc called "Peter and the Machine," which will take place between seasons three and four. New issues of 'Beyond the Fringe' will be released every two weeks at a cost of $.99 per download. Issue #1 is already available for download at read.dccomics.com or on mobile devices through the DC Comics app.