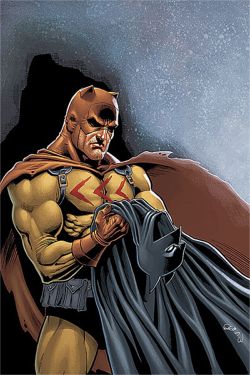 Some people would consider themselves skeptical when it comes to practices such as faith healing or the laying on of hands as a cure for ailments or to improve a person's general health. For years there have been cries of doubt and suspicion whenever it seems that someone is able to perform miracles, bend spoons, or summon the dead, practices that some place in the same camp as those mentioned earlier. Can the same be said for writers?

In the case of Gail Simone, it seems obvious that she is indeed the genuine article. For years, Simone has been one of the most respected and regarded writers in comics, male or female, and no matter the project it seems to turn to gold under her touch. Coming off her long-running work with the recently cancelled Birds of Prey, which flourished and deepened its content and characters under her run, she has taken up writing responsibilities for two DC Comics titles, one a tradition, the other an up and comer.

If you've yet to pick up the latest issues of Wonder Woman, opportunities for great storytelling are slipping through your fingers. Having already undergone several writers in its brief relaunch history, Wonder Woman has had a series of uneven and seemingly oddly connected storylines, but under Simone's direction, things seem to be back on track. It seems fitting that the story arcs, including the current one, Rise of the Olympian, are tending to take quite a number of issues to resolve.

When dealing with a character as steeped in ancient mythology and modern trappings as Wonder Woman, these longer stories seem fitting, as opposed to some of the more recent arcs that seemed to stretch for only two or three issues. What Simone has been able to do with DC's signature Amazon is inject character-driven drama and raw desperation and pathos into a storyline, currently her battle with the being known as Genocide, in a way that adds to and not distracts from, the action of the plot.

For too long since the days of George Perez, Wonder Woman has struggled to find writers who really knew how to tell her story, the story of a warrior who bears great responsibility to mortals, to her homeland, and to the gods. While the circumstances surrounding Diana Prince's relationship with all three of those groups has recently changed, the context of Wonder Woman's place in the world has not. Gail Simone understands that, and she understands how to effectively weave in modern nemesis, such as Cheetah, with more classic ones such as Ares. With the conclusion of Rise of the Olympian soon to arrive, expectations continue to be high for this flagship character.

On another end of the spectrum stands Secret Six, a book that was supposed to be a limited series that has been turned into an ongoing one, due in no small part to the masterful writing. Gail Simone's strength in this particular book has been in giving each character his or her own distinct voice without seeming clich or predictable.

The skill with this title has been to make readers care about historically second, and, in some cases, third tier villains using twisted story lines mixed with no shortage of violence and ambiguous morality. In the current issue of Secret Six, issue nine, Bane, Catman and Ragdoll are in Gotham City, thwarting the kidnappings of several children who belong to prominent men. Since this issue ties in to Battle for the Cowl, most of this dialogue and discussion is dedicated to a subtle debate, with some instigation by Ragdoll in a Robin costume, as to whether or not Bane and Catman have designs on being the next Batman while accusing the other of wanting the mantle.

What makes this issue work so well is classic Simone. There's attention to characters in equal enough parts that each gets his moment to shine. Bane's staid respect for Batman balances perfectly with the manic perversions of Ragdoll. Catman also diplays the levelheaded sarcasm that has made him one of the most enjoyable parts of this series overall. Now that the series is ongoing, the sky is the limit in terms of storytelling and direction, and Gail Simone loves an open canvas, especially with a group of villains who always seem to have a target on their collective back.

It's no miracle that Gail Simone garners as much respect and attention from fans and fellow writers; her style and soul comes through with each quip, command or pensive dilemma a character has. Those of little faith in storytelling should pick up either of these books, or both rather, as seeing both diverse books will show you that Simone's gift is pure gold, no snake oil included.