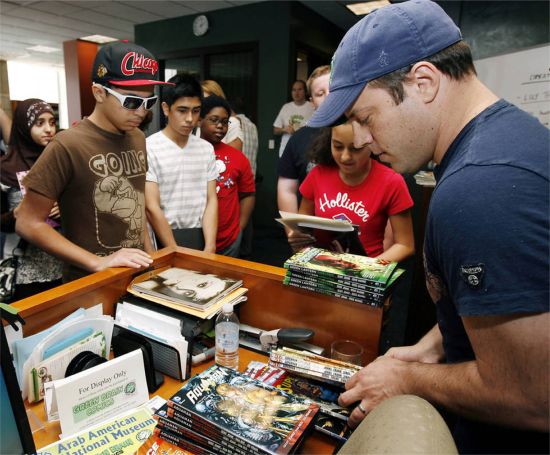 DC All Access is returning tomorrow--and it looks like they're going to do so with a bang. Describing somebody who will appear on the episode as "a super mystery guest," DC Entertainment Chief Creative Officer Geoff Johns and co-publisher Dan DiDio are teasing a major announcement on the episode--and leaving exactly what it might be up to fans' imaginations. You can see the brief, upbeat video below.

Given the use of the word "super" and the upcoming end of Superman Unchained, the best-selling Superman title (and one of the best-selling titles full stop) in the publisher's line, it's not a huge intuitive leap to assume that the announcement will be Superman-related. The major choices, then, are: Jim Lee or Scott Snyder, re-upping for a new run at one of the Superman titles after Unchained runs its course This one seems less likely than the others simply because Lee's duration on titles has been fairly short so far in the New 52, but Lee and Snyder are both superstars, and so would be A hot new writer, artist or writer/artist on one of the Superman titles More likely than not, it would be Superman itself, since Batman/Superman, Superman/Wonder Woman and Action Comics are all pretty well-stocked right at the moment. While DC has been banking on Scott Lobdell to shepherd the franchise for a little over a year now, fans haven't been wowed by his take on the character and it wouldn't be surprising to see somebody new take it over. The problem with this logic? What one person would make such an announcement work? The writer/artists DC is currently using are fairly few and far between, with only Matt Kindt, Jeff Lemire and Dan Jurgens springing immediately to mind and seemingly none of those available for such a gig (plus, Jurgens already had it once since the relaunch). On the other hand, the DC All Access team recently semi-announced that Geoff Johns would be taking over the writing chores on a new title (the title itself was bleeped and the speaker's mouth obscured)--and did so while wearing a Superman t-shirt. So if Johns--being one of the two men already at the table--were part of the reveal, the person on the other end of the table could just be an artist, not necessarily a one-man creative team. The obvious choice, given months of speculation and his own comments at ComicBook.com that there's a "better than good" chance he might draw Superman soon, would be John Romita, Jr.--but he did imply that he had already plotted out the story he wanted to draw, and so giving him a high-profile writer would seem to be either a waste of that writer or potentially a deal-breaker if Romita were serious about doing it his way. A new Superman title This one's possible, but with Batman Eternal and The New 52: Futures End out there, it certainly seems like the long-simmering rumors of a Superman weekly would make a lot of sense if they were going to have a major new launch. And, again, one guy is not really enough to build a weekly out of.