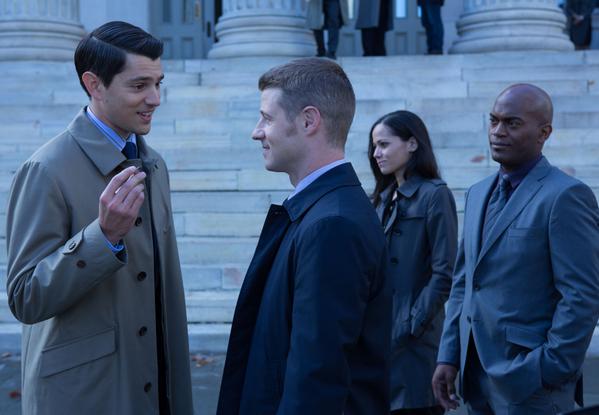 The episode opens with Jim coming home, Selina in tow. He calls out to Barbara but cannot find her. As Selina explores the apartment, Jim reads a note from Barbara, saying she's going away for a while to get herself together. His phone rings and it's someone he's told to come up.

Selina reads the note while Jim is distracted. She asks whether she'll be staying with him and he tells her no -- that he wants to put her in Wayne Manor. He brings a sketch artist in.

A prisoner who has a history of using household ingredients to make deadly bombs is being transported from Blackgate Penetentiary. He's hiding something in his mouth.

Back at Wayne Manor, Gordon shows Bruce a sketch of the killer based on Selina's account. Bruce doesn't recognize it, but asks whether Gordon believes her. Alfred objects to Selina living with them, but Gordon says that it's for her own safety, that the police department is full of moles. Bruce overrides him, saying that she's the best chance they have of finding out who killed her parents and she can stay as long as it takes.

Gordon tells Alfred that he, Montoya and Allen are meeting with an Assistant District Attorney today. He tells him that this isn't ideal, but that the witnesses who don't back out are the ones who care about the victim.

Selina is at Wayne Manor then, looking over the china. She introduces herself to Bruce as Cat.

The police transport carrying the bomber Hargrove is forced off the road, his guards killed and he freed as he is scuffling with the police who see something he's carrying.

Harvey is talking to some kid outside the courthouse, making him promise to stay in school and out of trouble. Jim, Montoya and Allen are walking up the stairs behind him and stop to see what he's doing. The kid promises him, and Dent looks at him thoughtfully, flips a coin and makes him call it. The kid calls heads, and Dent reveals the coin: it's heads. He tells the kid to go and stay out of trouble. He turns to address the police; Gordon asks him what he would have done if the kid picked wrong and Harvey shows him the two-headed coin, saying that teenagers always pick heads.

In Dent's office, he tells Gordon that his witness is useless, but the idea of having a witness is valuable. He suggests that Dick Lovecraft is likely involved in the murders. He wants to leak the fact that there is a witness and watch Lovecraft scramble. There's no paperwork, no names, Harvey just wants to rattle cages. He wants to make Gotham a better place. Gordon says no names, not his or his witness, then agrees to try it.

He heads to work, where Bullock is grousing about their case; it's Hargrove, who never used accomplices. Gordon asks who he talked to at Blackgate, but there was nobody. His brother John was the only visitor the whole time.  They're bringing him in for questioning. Harvey tells Gordon he can see he's having girl trouble.

Alfred is teaching Bruce how to box when Selina comes to see them; critiquing his style. Alfred is unhappy with Selina, who slept through breakfast, so he won't make her a snack until lunch. Bruce tells him when she leaves to be nicer, and Alfred accuses him of having a crush on her.

Penguin heads to the Liza's apartment, where he's rifling through her things. She comes home a second too late to catch him but knows someone has been there.

Hargrove's brother says that his brother never meant to kill anyone; that he was bombing munitions depots and weapons manufacturers. He says that Ian has always had mental problems but isn't a bad man. He doesn't know who would want to break his brother out, and hopes the cops find him so he can get help.

Elsewhere, his brother builds a bomb that's filled by a man in a deliveryman's uniform. The bomb is packed into a picnic basket, which is then filled with treats and delivered to a group of security guards; while they're eating, it blows up.

Bruce is peppering Selina with questions, and she fires back that he should be in school. He responds that he's developing his own curriculum to focus on what interests him. She asks what's the point, since he's already rich. He asks where her parents are, and she storms out.

After bombing the building, Hargrove's people stole a high-capacity explosive.

Alfred calls Gordon to say Selina staying there is not going to work out, and Gordon says he'll be there soon.

At the club, Butch asks Fish if she's sure about going through with something, and she says yes. Penguin stops in, sniffs Fish and reveals that he knows she smells like lilacs -- just like Liza.

Back at the police department, Bullock brings Gordon Hargrove's records from before Blackgate. Gordon admits Barbara left and he doesn't know where she is. Bullock said she'll be back.

Nigma comes up, showing them a name plate he found in the explosives from an abandoned metal factory. They head to check it out. There, they find Hargrove, who says the Russian mob is making a move against Falcone and that they've kidnapped him and threatened to kill his brother's family if he doesn't help. A group of armed men come in and there's a shootout, resulting in the Russians getting away with Hargrove.

At Wayne Manor, Selina is sneaking out; Bruce catches her and tells her that she isn't a prisoner; that he'll call her a taxi. She admits she's thinking about leaving, and apologizes for upsetting her. He asks her about the night his parents were killed. He feels bad for not doing anything, and she tells him he's crazy, that he couldn't have done anything. She says her mother is in show business, a singer and dancer who's really a secret agent for the government on a secret mission. She says that after the mission, her mother will come get her. She asks Bruce if he's ever kissed a girl, and whether he wants to. Alfred comes in to bring Bruce to study, inviting Selina, who declines.

The mayor is at Essen's office, demanding quicker action on the part of the police. Gordon objects, saying that it's the mayor's fault for housing the mentally ill at a prison with no facilities for them. The mayor storms out, and Essen says she's got the family in protective custody but of course Hargrove doesn't know that.

Dent brings Lovecraft in to tell him he's ready to bring charges against him in the Wayne case. Lovecraft first laughs it off, but then tries to scare Dent, who blows up at him, scaring Lovecraft and his lawyers, before going back to his normal, friendly self and telling them it's nice to see them.

At the police department, they're getting slowly closer to finding out who ordered the attack on Falcone.  It's Fish, of course, but that's revealed to the viewer rather than the cops; she meets with the Russians. She's setting them up to take Falcone's money.

Back at Wayne Manor, Bruce is putting his head underwater in the pool and timing it, when Selina comes to tell him he's weird. He says he's doing it to train to develop self-discipline and willpower. She says it won't work in Gotham, because out on the streets it's not enough to be strong; you've got to be ruthless. She tells him he's too nice.

Nigma is doing an experiment while watching a game show and answering all the questions. He realizes that the explosive that was stolen is used for penetrating armor, and Bullock and Gordon figure out that there's a disused armory that was recently purchased -- probably by Falcone. At the old armory, the Russians blow the iron gates and start loading a truck with money. Bullock and Gordon lead a group of police who surround the gangsters. The truck, provided by Fish, is blown up remotely, burning the money inside. Butch is on the other end of the trigger.

Bruce is studying when Selina throws a bagel at his head; when he asks why, she just challenges her to hit her with one, saying that she'll let him kiss her if he succeeds. He hesitates and she throws a second snack at him, leading to the two bouncing around the room throwing rolls and cookies at one another. Alfred comes in, looking momentarily annoyed, but then sees that Bruce is smiling and laughing and is okay with it. He gets a phone call: it's Gordon, who apologizes for not getting there yet. Alfred says that it's okay, that Selina is turning out alright.

Penguin is waiting at Liza's apartment when he comes home, and tells her that he knows her secret. He tells her that he will report her to Falcone, and blackmails her into continuing to work for Fish, but reporting back to him on her, or else he'll turn them in.

Dent comes to see Gordon at the police station, telling him that he's leaked his rumor to all the big players. Gordon makes him promise that he won't move without Gordon on it. Bullock comes, saying that Hargrove is headed to Arkham, where the mayor is creating a facility with the criminally insane.

Butch comes to Fish, telling her that everyone was dead and the money is gone. She's just happy they hurt Falcone.

The mayor holds a press conference to reiterate what Bullock just said.

The episode ends as Jim calls Barbara on her cell phone, telling her that he got her note, but that he needs her to come back, that life is empty without her. She sits, staring, as his voiceover plays (it's reminiscent of movies before cell phones when people used to screen on the answering machine), and then turns over and kisses Montoya, who is in bed with her.