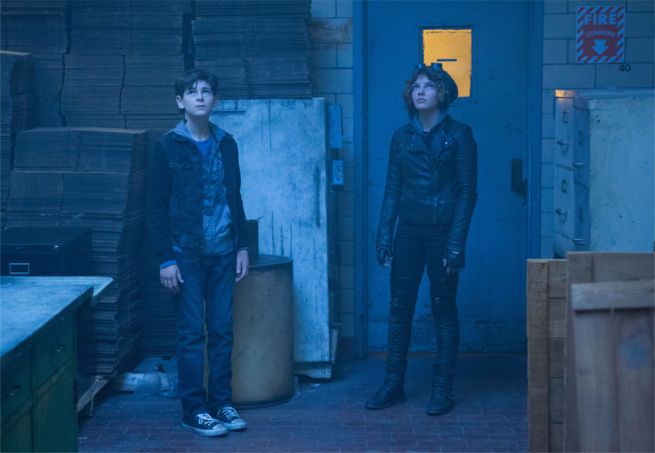 The episode opens on Wayne Manor; a woman is walking around the topiary garden when a groundskeeper comes and asks her what she needs; she says she's where she needs to be and kills him, then is joined by a pair of men dressed just like her in black leather. One of the men cuts the groundskeeper and the woman spreads some of his blood on her face.

Inside the house, Selina is teaching Bruce to balance on the bannister high above the first floor; he's nervous, but gets better at it. She tells him that she will take him to do it on the Midtown Bridge if he wants. She asks him about all the "homework" he's doing about his parents, and tells him he needs to move on. She asks if he wants to kiss her, and he declines, saying that he assumes she has an ulterior motive. She tells him that he's too nice, and he says that she isn't nice enough -- that she's a good person but not particularly nice. She says "screw you, orphan," and rescinds her offer to help him climb the bridge.

There's a ring at the door and Alfred goes to find the murderess from earlier pretending that she's been in a car accident and needs a phone. He invites her in but then realizes quickly that she and the men approaching the house are professionals (she and Selina seem to recognize one another), so he punches her and tells Bruce and Selina to run. During the ensuing brawl between Alfred and the killers, Bruce and Selina escape the house through a back door while one of the hitmen is killed and the other man and the woman flee. After they do, Alfred screams for Bruce.

Gordon leads a team of cops looking for information, with dozens looking for Bruce and Selina. Alfred tells Gordon that they were trained killers and Selina brought them. Bullock finds Selina's photo on the dead guy and confronts Gordon about it. He's upset Gordon didn't tell him about the witness, and about Dick Lovecraft and the leak and the rest. Bullock says he's going to head into the city to look for the kids, as Selina will feel comfortable there. Alfred joins him. Gordon heads to look for Lovecraft.

En route to the city, Bruce wants to call Alfred but Selina refuses. The pair argue, with each thinking the other is the target. Selina thinks someone is targeting Bruce for looking into his parents' murders. He's worried about Alfred, but she promises to get him a phone as soon as he's safe.

At Falcone Mansion, Penguin is brought in with a bag over his head; the two men who were holding him leave and Falcone demands to know how Maroni knew where his money was. Penguin deflects, but ultimately tells him that it wasn't Maroni, that Falcone obviously has a mole. Falcone is dismissive of the idea that it is Fish, saying that Penguin just wants to hurt her, but Penguin says he doesn't know why she's still alive, given how disloyal she is. Penguin promises to find the mole, and assures him that the mole will belong to Fish. Falcone says to bring him proof.

Later, Penguin's driver asks why not just tell Falcone the truth. Penguin says that it's all about timing.

Gordon finds Dent at his office, confronts him about how the killers found out about the witness. Dent admits that he had to drop Gordon's name in one of his conversations for credibility, but he maintains this is a panic move and the contract is actually a good thing. Gordon blames Dent, saying that they can't find Lovecraft to get the contract pulled. Dent reveals that there are a couple of safehouses under the name of his mistress; GOrdon goes to check them out.

At the police department, Bullock is getting nowhere extracting information from a homeless boy, so Alfred offers him money. The kid tells them how to find Selina's fence. The kid tells htem to ask Fish Mooney.

Cut to Fish at a table, looking shocked. There's been a gunshot. It was Falcone, who killed one of a number of other men siting around a table with Fish. The man was the armory guard, and Falcone tells the group that he will kill whoever else was involved soon. In the meantime, he says that tariffs will increase by 25% until the reserves are built back up. Everyone objects except Fish, and then Falcone has the food brought in, leaving the body there at the table with them while they do.

Back on the street, they find a payphone and Selina first says she has no money, and then asks why he's so attached to Alfred. He says Alfred is his family, and then she gives him a coin for the phone. She starts to leave, saying that she was obviously the target and that she only told him that he was a potential target so she could spend more time with him. He tells her that she has to come back to the manor, that he needs her to testify when Gordon finds the guy, but she says that will never happen. She heads away via fire escape and he chases her, ultimately jumping between rooftops to follow her in spite of a close call. She tells him that if he's going to follow her into her world, he has to play by the rules, and he assents.

Later, she tells him he can't call to let people know he's okay becuase they're disappearing. She brings him to a big, empty building where street kids hang out. Ivy is there.

At Fish's club, Butch is having his doubts, worrying about their safety if Falcone knows it's them. Bullock comes in to ask after Fish, and Butch turns them away. Alfred takes him to the ground, putting a knife to his throat and asking for Fish, who comes looking for her.

When she refuses to help Bullock, Alfred intercedes, asking her for help, ultimately guilting her into it.

At the shelter, Bruce is dressed down to look more like everybody else. Ivy comes up to see them, and Selina hugs her. Bruce introduces himself to her, and she gives him a cold stare. Ivy reveals that her mother committed suicide and she's traumatized but doesn't blame Bruce.

Selina asks after her fence, and excuses them. Bruce asks why she's scared of Ivy and Selina says becuas she's scary.

Gordon breaks into the Lovecraft safe house, gun drawn. He finds Lovecraft there, also with a gun, but Lovecraft willingly disarms. He seems scared, and denies he hired the hit, saying that the killers went after him, too, becuase he knows too much. He says that he's really a nobody, just like Gordon, and that the people who run the city are laughing at the whole thing.

Just before the Waynes were killed, Lovecraft found out that there was a run on stock as though something bad was about to happen. He started digging...

He's cut off by the killers, who say they won't hurt him if he turns over Lovecraft. Gordon puts his hands up but as they try to pass him, knocks out the man and ends up in a fight with the woman. She wins the fight, choking him into unconsciousness with his tie.

He wakes up when his phone rings; it's Gordon. Fish has a lead on the kids.

When Gordon gets up, he finds Lovecraft shot in the head in his bathtub, with Jim's gun. Gordon calls it in.

Back at the factory where Selina's fence is, she and Bruce show up to talk to him. The man lowballs her on a price for a bunhc of stuff she stole from Wayne Manor, and when she tries to leave, he has his goons bring she and Bruce to a room to wait for the killers.Bruce eyes the skylight way overhead and he and Selina start stacking up filing cabinets and shelving to try and get to it.

While they're doing so, the killers are waiting, having already paid Clyde. Selina gets to the skylight but can't get it open, so bruce throws her something to bang on it with.

Finally she gets the skylight open just as one of the killers open the door; she and Bruce hide out, knocking out the man and running.

Bullock and Alfred arrive on the scene and a gunfight ensues. The female killer sees Bruce and tries to chase as he hears, and runs to, Alfred. Her companions run out and start shooting at the cops as Gordon shows up. Bruce finds a number of metal pipes and starts throwing them at the female killer from on top of a stairwell. Gordon kills one of the other killers, who is trying to sneak up behind Bullock. The woman finally catches Bruce, putting a gun on him and demanding to know where Selina is. He tells her he has no idea, even though he's watching her leave. She tells him "Don't ever mistake bravery for good sense," and then leaves, while Alfred shows up to join Bruce. The two hug.

At the mayor's office, he is bawling out Gordon and Dent. He says that while he believes Gordon's story, he's going to sell the media a story of Lovecraft taking Gordon's gun and killing himself. The mayor pledges to ruin Gordon's career. Gordon tells the mayor to kiss his ass.

At a press conference, the mayor tells the press that Gordon is being dealt with. He demotes Gordon to work Arkham. Nygma comes and expresses his disappointment, then hugs him and walks off. Gordon and Bullock agree to get togehter for a drink soon.

At Wayne Manor, Bruce is looking at his evidence files and board again when Selina breaks in. She's brought him the bag of stuff she had stolen from Wayne Manor, saying she wants to "keep things honest between us." She tells him that she's keeping a cigarette case she took, and kisses him, then leaves as Alfred comes in. He takes the bag of valuables from Bruce, obviously knowing that he just missed Selina, and says the house seems quiet.

Gordon reports to duty at Arkham, walking in through the gates with a scowl.