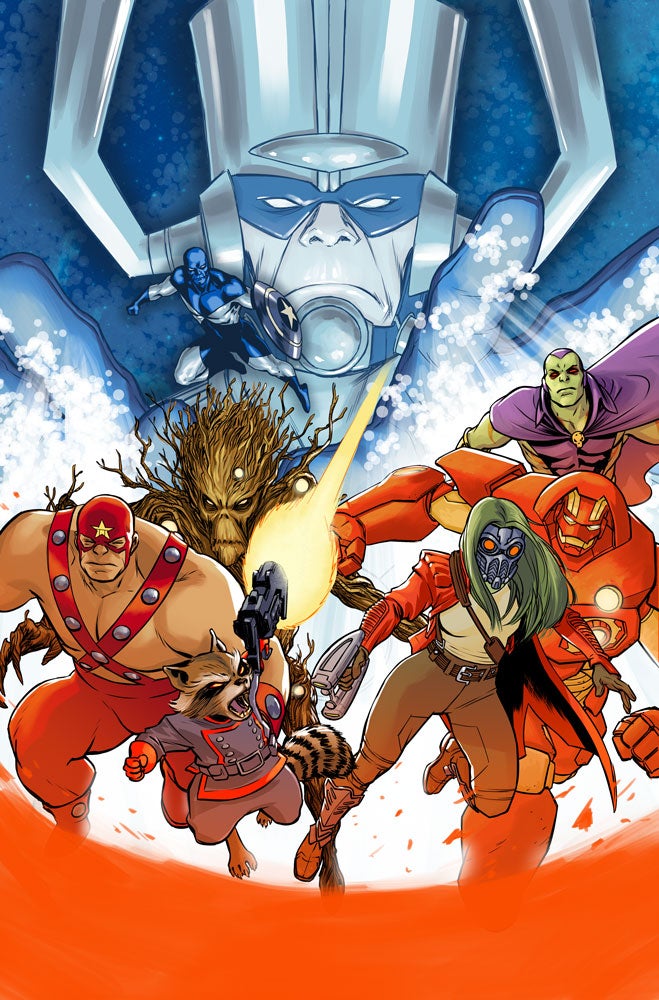 Marvel's 100th Anniversary project is shaping up to be an interesting digression from mainline continuity, and perhaps for that reason, lacks the buzz of some of the larger comics coming out this month. But in the 100th Anniversary Issue of "Guardians of the Galaxy," edited by Devin Lewis (and stewarded, no doubt, by Senior Editor Nick Lowe, who's been responsible for some solid comics since he took over the Spider-Man office following Stephen Wacker's departure) with a script from sci-fi superhero writers Andy Lanning and Ron Marz, and art by Gustavo Duarte and Edgar Delgado, the value of this project, which imagines editorial output during the 100th anniversary of Marvel, is made apparent.

The plot in "Guardians of the Galaxy" is as you might expect from a one-off gimmick comic from Lanning and Marz, both of whom made their reputation on cosmic superhero books "Guardians of the Galaxy" (the Lanning/Abnett run seems to be the basis for the upcoming film) and "Green Lantern," respectively. The future Guardians, consisting of modified or upgraded Marvel stalwarts, find themselves in a tussle with Galactus, who, in a "previous" issue was infused with the power of an omnipotent Silver Surfer. It's cheeky, light fare, with a nice surprise ending. All in all, nothing to write home about.

It is the art in this issue, courtesy of Brazilian cartoonist Duarte, however, that makes this book worth the read.

For better or worse, in the last 15 years or so, many mainstream superhero comics have taken on the sheen of the cinematic blockbuster, full of stiff renderings and widescreen pablum. This is due in no small part to the success of superhero films and the artifacts that influenced them ("The Authority" and "Ultimates" popularized the so-called widescreen comic format) forming a dizzying chicken and the egg scenario. Because of this, artists with more stylized approaches like Skottie Young or Darwyn Cooke stand out in a major way (and enjoy a fair amount of success from the deviation).

Duarte's art reads like the storyboards to a Guardians of the Galaxy Saturday morning animated series (that Marvel would be crazy not to make) with characters full of expression doling out cartoonish violence on robots and chrome gods alike. Delgado's vivid yet easy to digest palette is at home inside Duarte's line and ties the whole package up nicely. This is a good looking book, and one that you might just be able to hand to a kid (not something at the forefront of either of the Big 2 publishers' minds these days).

Comic shop shelves could stand the weight of a few more experiments like the 100th Anniversary Guardians of the Galaxy issue. If nothing else—in a seemingly more writerly climate at present—this issue is a nice break from standard operating procedure, highlighting the work of a talented artist who would be at home on some of Marvel's zanier properties.

Marvel 100th Anniversary: Guardians of the Galaxy #1 is available now.
Start the Conversation