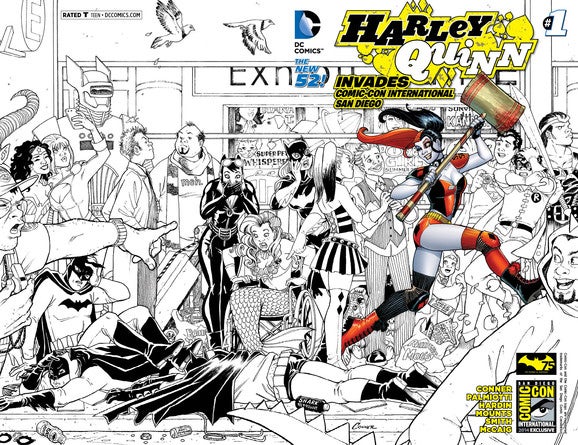 has a first look at DC Comics's Harley Quinn Invades Comic-Con International: San Diego, the upcoming one-shot in which Harley finds herself celebrity-hunting at the famed convention and stumbles upon Arrow star Stephen Amell.

Amell's cameo just one Easter egg in the comic, written by Jimmy Palmiotti and Amanda Conner and drawn by various artists.

Harley, of course, had a cameo in a recent episode of Arrow which starred the Suicide Squad, a team of which she's a member in the comics. She was also slated to  appear on the season finale, but the scene was cut for time. Whether she will return in Season Three is not yet clear; even the Suicide Squad hasn't officially been confirmed.

"Harley and her freak show friends get a booth at Comic-Con," said Conner. "Harley to come along to help them out [and] wherever she goes, mayhem ensues, and that's what happens at Comic-Con. More mayhem than the usual."

"We've been going to Comic-Con for over 20 years and we tried to put in all the positive stuff. We wanted to celebrate Comic-Con rather than go after it. Because that's a whole different book altogether," Palmiotti explained. "[Harley] has a comic strip that she wants to show off at the Con to see if anyone's interested in hiring her to draw it. It features a character Harley made up called Hurl Girl, a superhero whose power is to throw up."