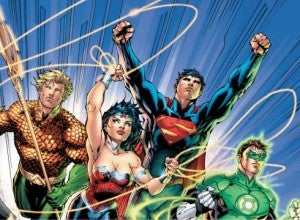 The holidays are coming to a close, and with the new year just hours away, it’s time to take our annual look back at the year that was in comics, with some of the hits, misses, high points and low points.  Yes, we’re taking a look today at my own personal lumps of coal and the best of the best.  My colleague Russ Burlingame covered his list of the best comic book titles recently, so now it’s my turn to take us back down memory lane of comics 2011 and see what made the list!

Best Comic Book Event:  Undoubtedly this would be The DC relaunch and the new 52.  I’m not giving this best event simply because it was the most prominent, but because it actually was, on the whole, pretty amazing.  Russ and I reviewed every new title, and by and large I would say we enjoyed almost all of them. The feat itself was risky, with unknowns, fan unrest and high media scrutiny all playing a role, but DC pulled off an amazing event that has put them, for now, in the lead sales position over Marvel, something the company has not had in a few years.  It takes this title not because of the scope of the event, but because it actually was successful and really did something with impact to the comics universe as a whole.   Honorable mention to Top Cow's Artifacts , which is a sweeping, epic story for the company.  A search for 13 important artifacts that lie around the Top Cow universe has led to an enjoyable, overlapping story with some of Top Cow's biggest talent and characters.  2012 sees the story continue, and that's certainly something to watch.

Biggest Non-Event: Most Marvel events resonate for awhile after their ending, but this past year Marvel's Fear Itself did little to propel the universe forward.  What started out as a promising, epic story with several powerful beings receiving mystical hammers and waging war across the world ended with an anti-climactic sigh.  The good guys won, of course, and while some pretty cool things happened, one of the biggest shocks of the series, Bucky/Captain America getting stabbed through the chest by the Red Skull's daughter Sin, was totally undone at the end.  We soon learn that Bucky is alive and kicking, setting up a new story for 2012 and the character itself.  Even the battles themselves were not all that spectacular, with the final issue giving a rather pat resolution to this clash of beings of massive and immense power,  ho hum.

Best Comic Book Movie: This was probably one of the biggest summers for comic book movies, with both DC and Marvel putting out films, alongside some smaller companies as well.  Unquestionably, the best of this group was Marvel's Captain America: The First Avenger.  For the duration of the film, there's plenty of action, great depth with the interplay between the military forces and political propaganda of the era, and Chris Evans simply looks and fills out the part of Cap.  Hugo Weaving turns it up as the Red Skull, and the film does a great job of setting up next summer's The Avengers.  From start to finish the film doesn't disappoint, and it was clearly the best of the crop that came out this summer.  Honorable mention goes to X-Men: First Class, also from Marvel.  Despite January Jones' blah take on Emma Frost and Kevin Bacon camping it up as Sebastian Shaw, the film is a terrific origin film for one of Marvel's most well-known teams.

Worst Comic Book Movie:  While both Green Lantern and Thor had their flaws, they were nowhere near as terrible as Cowboys and Aliens,  a film so inept at storytelling and creating a sense of suspense and thrills that I had to fight the urge to leave the theater halfway through.  The film's premise is interesting, with stories of alien invasion/human snatching typically not set in the American west of the 1800s. However, the execution is poor, and Harrison Ford chews the scenery in every shot.  Unintentionally funny, the film is probably not just one of the worst comic book films I've ever seen, it's also one of the worst movies I've ever seen, period.  The film was met with mixed reviews and scraped by with a small profit.  This is disappointing no doubt for Platinum Studios, the company that produced the source material for the film as a graphic novel to begin with.

Worst Back From the Dead: One of my biggest complaints about current comics is that fact that NO ONE seems to stay dead anymore!  Not to sound like an old codger, but death in comics used to mean something.  Now it feels like routine that they will return, sometimes within a few months of death.  The worst case of this was this year's return of The Human Torch to the Fantastic Four.  The grass barely seemed to grow over Johnny Storm's grave before he returned in this month's Fantastic Four #600.  We all knew it would happen, but so soon?  Just months ago he appeared to sacrifice himself to the hordes of Annihilus and the Negative Zone.  Even though we all saw his return coming, it feels very cheap to bring him back this soon.  Had this happened three or four years from now, maybe that would have been cooler and more meaningful.

Best Comic Book Television:  Did you think anything else would be here besides Image Comics' The Walking Dead?  It's a fantastic show in almost every way, comic book origins or not.  While the series has taken a different direction from some of the storylines covered in the Robert Kirkman series, the gripping drama and tension comes through loud and clear in each episode.  The series has translated well to the small screen, and fan hype has solidified the series a guaranteed spot on air for years to come.  Zombies have become sort of a fad in comics in recent years (Marvel Zombies anyone?) but The Walking Dead handles the concept in a way that makes sense and feels realistic and legitimately frightening.  It's nice to see that the same level of thought has gone into the TV series as well.

Thank Goodness THAT Didn't Air on TV:  Ugh.  Was there any bigger disappointment in TV this year than the awful Wonder Woman pilot.  The only one of DC's big three (Superman and Batman being the other two if ya didn't know!) to not make it recently to the big or small screen successfully, Wonder Woman was under the capable hands of David E. Kelly, whose hands had created television gold in the past.  That soon changed once pictures of her costume (blue pants?) emerged along with the news that she would be an angsty, cry in her ice cream single gal.  The pilot leaked online and reaction was so bad that the project was scrapped altogether.  It's really a shame, as plans for a Wonder Woman movie stalled out and now with this failure the Amazon princess may never get the next step she deserves.

WHOA! How Will THAT Play Out Moment:  Lots of these happened this year, but one of the most memorable would be the end of Buffy Season Eight in Dark Horse.  The series expanded to keep a developing story going, and the conclusion way back in January of this year was certainly a way to end.  Lots of game changers happened in the last arc, "Twilight's Gleaming", all of which set the stage for the recently begun Season Nine.  This arc has it all, drama, surprise twists, characters appearing out of nowhere, betrayal, all of it resulting in *SPOILER ALERT* Buffy having to make a move that removes magic from the world.  Vampires and slayers remain powerful, but characters like Willow now find themselves depowered.  It was a heck of a move for a universe so dependent upon magic and its elements in more recent stories.  Honorable mention goes here to Marvel splitting up the X-Men, a move that seeks to jolt some new interest and excitement into a family that had grown oddly dull over the past year or two.

Rest of the Best:  Aquaman is seeing a creative and interesting resurgence in the new DCU, Boom! continues to roll out critically well-recieved titles such as Elric: The Balance Lost and their new Planet of the Apes line, Top Cow's Pilot Season proved so popular it crashed the company's site recently, Batwoman proved that she can more than hold her own as a member of the Gotham City family, and Norman Osborn's new Avengers line up proves to shake things up over at Marvel.  Joe Simon's autobiography proved to be a fascinating look at the icon's work in comics, IDW's The Cape gave us a creepy and compelling story, and The Scarlet Witch made herself known again in the ongoing Young Avengers: The Children's Crusade.