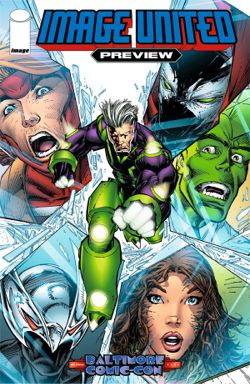 Image Comics has announced that they are returning to the Baltimore Comic-Con in a big way, and they are promoting appearances by their largest lineup of creators ever at the Baltimore Comic-Con. Image Comics will also be offering a special Image United preview book variant available only at the show. "It's good to be back in Baltimore," said Robert Kirkman, who is Image Comics Chief Operating Officer and Image United writer. "It's one of the biggest conventions out there with a sole focus on comic books. Everybody here at Image Comics is proud to partner up with Baltimore for our biggest convention presence outside of San Diego Comic Con." Robert Kirkman is scheduled to take part in two panels at the convention. For The Image Comics Show on Saturday at 1 PM in the Avengers Mansion room, Kirkman will be joined by Frank Cho, Michael Avon Oeming, Richard Starkings, Jeff Parker and AJ Lieberman. During the panel, Frank Cho will be announcing the finalists to his 50-GIRLS-50 Talent Search. On Sunday at 1 PM in the Avengers Mansion room, there will be an Image United panel, which will take a took at Image United with the crossover artists' Erik Larsen, Rob Liefeld, Whilce Portacio, Marc Silvestri, Jim Valentino and writer Robert Kirkman. On both Saturday and Sunday, there will be Image United signing events from 3 PM to 4 PM at the Image Comics booth. Creators will be signing copies of the Baltimore Comic-Con's Image United Preview variant edition. Attendees can purchase the comic at Baltimore Comic-Con's Exclusives booth #1201. Guests appearing at the Image Comics booth #1501 include Mike and Laura Allred, Ryan Bodeheim, Frank Cho, Jay Faerber, Bryan J.L. Glass, Greg Horn, Ryan Ottley, Cory Walker, Jason Howard, Scott Kurtz, Luna Brothers, Richard Starkings, Tom Scioli, and Ben McCool. The Baltimore Comic-Con takes place on Saturday, October 11th and Sunday, October 12th, at the Baltimore Convention Center.