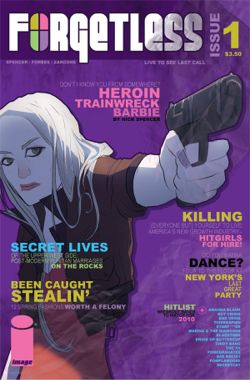 Image Comics has announced a new five issue limited series called Forgetless. The series will detail the final dangerous days of New York's most notorious nightclub, Forgetless. The writer for Forgetless is Nick Spencer and the artists are W. Scott Forbes, Marley Zarcone and Jorge Coehlo. "Forgetless is akin to Rashomon in a night club, just with a lot more bullets," said Nick Spencer. "In a way, Forgetless may be the first action-thriller perfect for fans of the films 'Go!' and 'Igby Goes Down', especially with how Scott, Marley & Jorge's styles each combine different aspects of indie and blockbuster action comics. Forgetless will certainly be a night to remember." The stars of Forgetless are Sonia and Sara, who are two struggling models turned professional killers. Sonia and Sara plan on making sure their favorite night club goes out with a bang. The club's final night features differing perspectives at the pen of Forbes, Zarcone and Coehlo. Image Comics Vice-President Jim Valentino said, "Having worked with Nick on his Existence 2.0 and upcoming 3.0 series, I was very interested in seeing what he came up with next. Considering this combined with his extremely impressive roster of artists has me highly looking forward to what Forgetless has to offer." Forgetless #1 is scheduled to arrive in comic book stores on December 9, 2009.