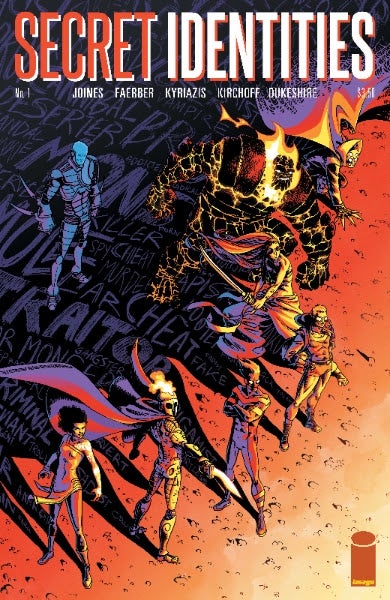 Image Comics' mysterious character teasers have culminated with the announcement of Secret Identities, a new superhero series from writers Brian Joines (Krampus!, Noble Causes) and Jay Faerber (Copperhead, Graveyard Shift), and artists Ilias Kyriazis (Blood Opera, Manifesto) and Charlie Kirchoff (Doctor Who). The series will follow the superhero team called The Front Line, consisting of the characters from the teasers. The series will debut in February.

According to Image, in Secret Identities #1, the supergroup known as The Front Line has just invited the new hero Crosswind to join them. But what they don't know is that Crosswind is a mole, sent to learn all their secrets. And the Front Line has LOTS of secrets…

"Brian and I have been friends for a long time, and one of our common interests is super-heroes," said Faerber. "So it only made sense that our first writing collaboration would be on a project like this. And Ilias' art is explodes off the page, mixing a classic super-hero style with an alternative sensibility."

"It's great to be dipping my toe into super-hero waters," added Joines. "And to be doing it with someone with a track record like Jay is a true thrill. On top of that, watching Ilias bring these characters, some of whom have been warming the bench in my head for a very long time, to life with such vibrant style and energy… absolutely amazing."

Secret Identities #1 goes on sale February 18, and can be pre-ordered with Diamond Code DEC140617.