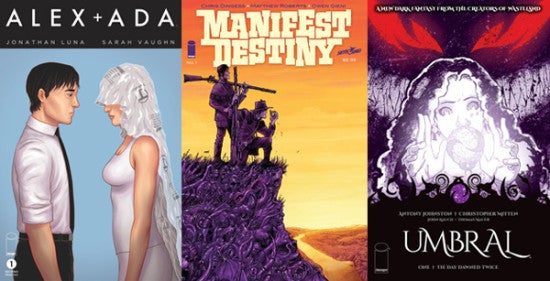 Three debut series from Image Comics, two fantasy and one science-fiction, have sold out at the distributor level and will go back for second printings.

Among the three was the first issue of ALEX + ADA from Jonathan Luna and Sarah Vaughn, a science-fiction drama set in the near future about a man who forms a unique bond with an android. In light of its success, ALEX + ADA has been expanded from 12 issues to a 15-issue series.

Adding to the excitement, Umbral #1, a brand new dark fantasy adventure series from Antony Johnston and Christopher Mitten has enchanted fans. This story of a thief accidentally discovering the beginnings of a demonic invasion blends paranoia, magic, and dark prophecies.

Chris Dingess of Being Human and up-and-coming artist Matthew Roberts’ Manifest Destiny has sold out, as well. The newest genre-blending series from Skybound explores Lewis and Clark’s adventures in an untamed Western frontier where monsters lurk in the shadows.

Despite being sold out at Diamond Comics Distributors, the first issues of these series may be available at your local comic book store and are available digitally via Image Comics's website and ComiXology.