Image Comics announced today that they will expand their "Image Firsts" program, which offers a $1 introductory price for the first issues of some of the publisher's most popular series, to include five of 2012's hottest launch titles. Along with new prints of The Walking Dead #1 and Chew #1 available in December, the Image Firsts program will add 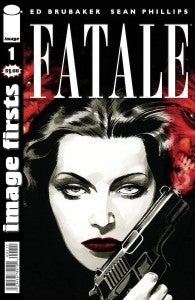 , The Manhattan Projects, Revival, Saga and Thief of Thieves to its lineup of low-cost, entry-level comics. Earlier this year, of course, all of those except Revival, which hadn't been released yet at the time, were announced as part of an aggressive digital initiative that saw the publisher give away the first issues of more than twenty comics free on  the ComiXology digital marketplace. Here's how Image describes the projects:

FATALE is the newest title in the fruitful collaboration between writer Ed Brubaker and artist Sean Phillips (Criminal, Incognito). Colored by Dave Stewart, FATALE tells the story of Josephine, an immortal femme fatale who unwillingly entrances men and ensnares them in a deadly, decades-long battle with unfathomable evil. Melding noir and horror, FATALE is called an "addictive page-turner" in a starred reviewof its first collection, DEATH CHASES ME, in Publishers Weekly. 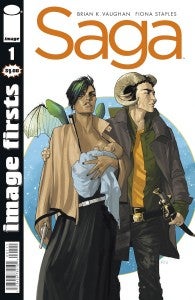 SAGA, an ongoing series by Brian K. Vaughan (Y: The Last Man, Runaways, Ex Machina) and Fiona Staples, has been the comics break-out hit of the year, garnering near-universal praise and a dedicated fan following. A space-opera-style science fiction adventure, SAGA follows a family on the run — Alana, Marko, and their baby Hazel — as they try to escape the ingrained hostilities that have kept their two worlds at war for centuries and threaten their lives. The first volume is currently number four on the New York TimesPaperback Graphic Books Best Seller list. Publishers Weekly's starred review called SAGA a "human story that will leave readers desperately awaiting the next volume." THE MANHATTAN PROJECTS by Jonathan Hickman (Fantastic Four, Avengers), Nick Pitarra (THE RED WING, also with Hickman), and Jordie Bellaire tackles Cold War-era science like no comic has before — imagining a history where the group of geniuses who brought us the atomic bomb also worked on secret occult experiments. Comics Alliance called the series "pure mad science in comic book form." Its first trade paperback hit stores in September. 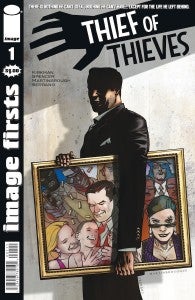 THIEF OF THIEVES is a crime series created by Robert Kirkman (THE WALKING DEAD, INVINCIBLE) and published under his Image Comics imprint, Skybound. Redmond, a world-class thief, wants to leave behind his life of crime and rebuild his family, but it isn't going to be so easy to resist the call of one last caper and escape his past. The first story arc of THIEF OF THIEVES, "I QUIT!", written by Nick Spencer and with art by Shawn Martinbrough and Felix Serrano, was collected in September. A Booklist review says that Redmond's "redemption, headed off at every corner, makes for a classic emotional stake, and the complexity of the plot, often flashing back to the past to explain the present, holds steady interest." REVIVAL is a completely new take on the undead genre that creators Tim Seeley (HACK/SLASH, WITCHBLADE) and Mike Norton (Battle Pug, IT GIRL AND THE ATOMICS) call "rural noir." When, for one day, the dead rise in a small town in Wisconsin, it changes their quiet world forever. Officer Dana Cypress is tapped to investigate the phenomenon, only to discover it's hit closer to home than she imagined. In aSeptember article, FearNet writer Alison Nastasi wrote, "Revival peers at its readers from the underbelly of America's heartland, embracing the moodiness and isolation of the rural landscape." The collection of the first five issues, YOU'RE AMONG FRIENDS, will be in stores on December 12.