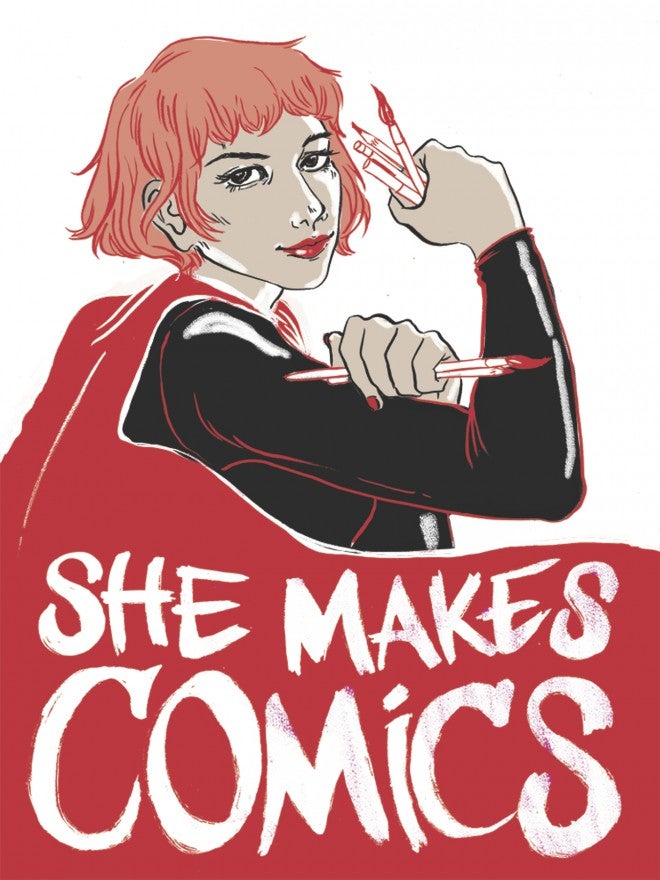 Marissa Stotter's documentary, She Makes Comics, officially debuted last week, showing viewers what the comics industry from a female's vantage. By speaking with leading female creators and leaders from the past fifty years, Stotter reveals an entire secret history within comics that's filled with oft-ignored figures and game-changers. And it's through this exploration that Stotter reveals a larger truth: There's a disparity amongst men and women within the comics industry, both on the creative and consumer side.

Stotter's documentary dives into that inequity by presenting the context, confronting the issues, and celebrating the triumphs within comics and women's complex relationship. What results is a fascinating study that critiques as much as it informs, and will hopefully inspire a discourse on how comics can be more inclusive to women. Here, Stotter spoke with us about what she learned while making the film, the progress women have made in comics so far, and what everyone can do to shrink the industry's gender gap.

I really feel like everyone had a different story to tell. It made things so interesting, especially when we were interviewing people from different generations. It was just so fascinating to hear [Aquaman artist and Metamorpho creator] Ramona Fradon talk about how she just went to DC offices and showed them her stuff, and they hired her. Whereas today, you can't do that. It's interesting to see how much the landscape has changed. But course, it hasn't changed much in the ways that women are still kept out of certain roles.

What are some of the ways that women are still kept out of the industry? Where do you think the glass ceiling currently is for female comic creators?

My perception is that there isn't overt discrimination or overt sexism, but it's a situation where women aren't necessarily thought of by the powers that be for certain jobs. Comics have historically been dominated by men, so naturally, an editor doesn't always gravitate towards a female creator when they're looking to hire someone. They think of the male creators that they know and have worked with before. It's this very subtle way in which women aren't able to get certain jobs. There's also the fact that there are still comparatively few women in comics, especially at the Big Two.

And I think the way to change that is that companies need to make a more conscious effort to expand their purview and hire a diverse group of creators. It also doesn't hurt for female creators to stand up for themselves and say "Hey, I'm an artist or writer, and I do this really awesome work." Essentially, they need to reach out. There's a confidence gap between men and women, which Janelle Asselin mention in the film.

What female creators are making the most progress in shrinking that gap, and giving women more confidence in the industry?

There are a number of high-profile women working for the Big Two. Of course, there's Kelly Sue DeConnick, Gail Simone, Becky Cloonan, and G. Willow Wilson. They're all veritable superstars in the superhero comics world, and I think they're doing a lot to change big superhero comics and say, "women are perfectly capable of writing and drawing superheroes." It all trickles down to the readers, and it says that women are interested in reading superhero comics. It defies the long-standing notion that women don't like superheroes and that female creators aren't interested in superheroes. Those creators are doing a lot to change the face of the superhero genre.

Meanwhile, the indie world has their own superstars. Everyone knows Fiona Staples and is reading "Saga." I think that there are also a lot of web cartoonists breaking out and becoming household names in the comics world, like Noelle Stevenson or Kate West. I think that trend is only going to continue, and more women will rise to prominence in the comics world. It's the natural progression. There are more talented women putting their work out there and becoming known for producing great content.

And what female-led comics are giving the best depictions of women right now?

On the superhero side, I'm loving "Captain Marvel" and "Ms. Marvel." With Ms. Marvel, who' s a female Muslim American superhero who also happens to be from my home state, it's just incredible to see that kind of character in superhero comics. For the longest time, superhero comics were mostly dominated by white male heroes, or the occasional white female hero. Ms. Marvel is extremely important for the medium, and it just also just happens to be a wonderful book. It's well written, and the artwork is always gorgeous.

On the indie side, I think Kelly Sue DeConnick's creator-owned work is actually amazing. It's doing a lot to advance the way that women are depicted in comics. "Bitch Planet" just came out, which is her take on a exploitive female prison films. The characters in that book are so incredibly diverse. They all have different backgrounds, and even different body types. I think that comics have definitely come a long way from the nineties, where women were depicted in this pin-up fashion. We have such a diversity of female characters now, which is wonderful.

How did we get to this point of diversity? Where did you see the first major breakthrough with women's involvement in comics?

The majority of comics' readership were actually females back in the fifties. But then, for various reasons, female readership dropped off. It's only now in the past decade that it's picking back up again. I think you could make a strong argument that in the eighties, at the advent of Vertigo, a door was opened for women. Through Vertigo, DC was producing comics that were appealing to a lot of women. There's Sandman, like we mentioned in the film. Karen Berger told me that Preacher had a huge female following. The development of a more sophisticated style of storytelling attracted women in droves.

Slowly, the mainstream comics industry produced material that was appealing to women, or least didn't alienate them with offensive depictions. I think that brought back the female readership. But I also think that female fans have a greater voice now. The Internet has seen to it that female fans don't go unnoticed. They can comment on what's out there, they can recommend books, or they trash books if they want to. They can demand better representation or at least better material. I think any publisher would be reckless if they didn't take into account their readership's online responses.

I'm glad you mentioned the Internet, because I wanted to discuss something I've seen a lot online recently, and it's the term "Strong Female Protagonist." It seems to be thrown around so much these days, which is almost diluting the term. So, I was wondering what you thought about the term's overuse, and what your definition of the Strong Female Protagonist was.

Yeah, it's sort of lost its meaning. The term started out as a way to describe female characters that weren't simply damsels or distress or sidekicks. They had a strength that was independent of any male characters. But now, when fans say "strong female protagonist," I think they're looking for female character that feel like they're real people. They're not stereotypes, they're fully fleshed out, and they have flaws along with their strengths. From the other extreme of writing, women are often damsels, or are just perfect; that makes them utterly boring and unrealistic.

Now, there's just a demand for creators to write women as people. Writer don't have to be precious about it, or rely on stereotypes, or what they think the "ideal woman" is. Ultimately, fans don't want female characters treated like aliens. There doesn't have to be a different approach to writing women, just because of their gender. If you can write male characters, you should be able to write female characters. Your skill set doesn't necessarily change. So, I think that's what's altered now, and it's taken on a new meaning from a few decades ago.

Cool. To shift gears, I wanted to talk about comic shops. In the movie, they're painted as fairly undesirable places for females, filled with oglers and mockers. Do you think comic shops as a whole are making an effort to change that perception? If so, what are they doing?

I think that the smart retailers are realizing that there's an entire demographic that would come into their store if they were a little more welcoming or changed some of their business practices. A majority of the stores that I've been to have been really welcoming spaces. There are men and women working behind the counter who are there to help. Fortunately, I haven't had that isolating experience in the comics shop since I was a kid, and I think a lot of women are experiencing that too. Retailers are definitely wising up in that women want to read comics, and that they can market to that entire demographic.

And what's your takeaway on cosplay and conventions? What did you learn about cosplayers from your research?

Generally, cosplay is a great part of fandom where women can really express their love for the character they're into. It's something that they can call their own. There are certainly male cosplayers as well, but my impression is that cosplay is a female-dominated space. I think it's really great that women have a part of fandom that more or less belongs to them. Cosplay still has a long way to go before it's really accepted as something wholly legitimate. There was that one creator who recently made comments about how cosplayers are starved for attention. It was really insulting, but I think he represents the fading view of cosplay that says it's not acceptable. People people see cosplay as a way to engage with the comic convention experience. I think it's a wonderful thing, and I hope it continues to grow.

I was wondering what you thought about the current artistic portrayals of women in comics. Where do you think the industry is in providing realistic images of women's bodies, as opposed to ten or twenty years ago?

I think there's progress. You look at something like the recent revamp of Batgirl, where she looks like a regular young adult who just happens to be wearing a costume. Her costume looks completely utilitarian, which is not necessarily something you always saw in the outfits given to female characters. Artists are more conscious about the way that they're depicting women now. They're making sure that they're not unduly sexualizing female characters, especially when there's no reason to do so. I know fans really appreciate it, especially female fans. They feel less alienated by the depictions in comics, and the change has been feeding itself. The fans become appreciative of the more civilized art style,and the companies are realizing that. They're sending down the order to the artists to depict women in a more appropriate manner.

Awesome. So to wrap up, what's the one thing you hope viewers take away from your film?

I see the the film's purpose as two-fold. First, of course, I want to educate viewers and enlighten them about aspects of comics history that maybe they weren't so aware of. The film's other goal is to inspire. I want women and little girls to watch this film and say, "I can make comics. This is something that I can do," and then go off and start their own project. It's meant to spread an uplifting and celebratory message. If that gets across to viewers, then I think I'll have been successful.

I was monitoring the She Makes Comics Twitter feed the other day, and I came across a bunch of people saying that as soon as they were done watching the documentary, they went to their desk and started drawing. And really, that's the best response I could hope for.